Review: The Bottom Line – No Vacation 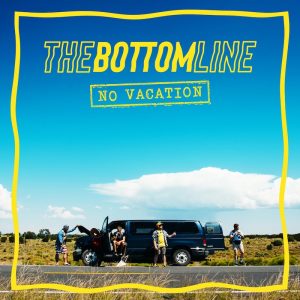 “I’m sick of singing without meaning” sings The Bottom Line frontman Cal Amies as he kicks off the band’s new album, ‘No Vacation’. From the outset, it’s clear the London-based quartet are looking to make a real statement. And you can’t blame them, as it’s been seven years since the release of their debut album ‘Role Models?’ but has the wait been worth it?

All in all, it’s standard pop-punk fare. There are shades of Simple Plan, blink-182 and All Time Low present – the band risk sounding generic in parts, not really asserting themselves and conveying over a distinct identity. Opener ‘Reasons’ is essentially the entire album in microcosm; fun and frantic but not particularly going anywhere.

As they’ve evolved over the past few years, The Bottom Line have gone for a cleaner sound, it’s all pulsating power chords and angsty vocals from Amies. “Let’s go back to the start/And watch it fall apart” he sings on ‘Over And Over’, the sort of intense, punchy pop-punk track that feels destined to be a highlight of The Bottom Line’s live show, surely making a future appearance at Slam Dunk.

As an album, ‘No Vacation’ begins to get slightly stronger as it goes on, ‘Like The Movies’ and ‘Everything’ being an emphatic double whammy. ‘Everything’ is more melodic than some of the more straight-forward pop-punk here, and hints at more exciting directions in which the band could move in future. Whereas ‘No Vacation’ begins as enjoyable but not remarkable pop-punk, they start to come into their own with the former tracks.

Overall though, nothing that The Bottom Line do here is particularly original or inventive, when compared to the likes of Neck Deep and The Faim. Difficult second album? Not exactly, but it’s still unclear where exactly the band go from here. They’ve got potential, but let’s not make it another seven years until the third album, please.

‘No Vacation‘ by The Bottom Line is out now on Marshall Records.