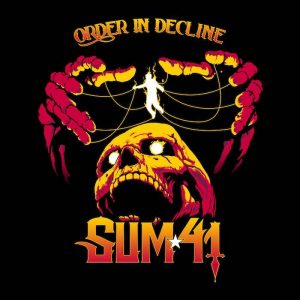 Sum 41 returned revitalised in 2016 with ‘13 Voices’.  Frontman Deryck Whibley’s life-changing battle with alcoholism and the reinstatement of original lead guitarist Dave Baksh, gave the band fresh life. It was bolder and infused with new energy. New album ‘Order In Decline’ keeps that momentum and it might just be the most exciting music they’ve made in more than a decade.

While much of their discography feels inspired by whatever Green Day released last, this time they’ve stripped back. Their pop-punk with a metal aesthetic is harder, heavier and far more distinct. Gone is the ill-advised experimentation. Instead, it’s an album crammed with fast and fun songs built around big guitar riffs, like ‘Out For Blood’. While there’s space for Baksh to rip out a solo, it doesn’t have chance to sag.  Similarly, ‘Eat You Alive’ is driven by a focused, powerful riff. Everywhere, the band sound like they’re having a blast, from the upbeat bounce of ‘Heads Will Roll’ to the surprisingly heavy outro to ‘Turning Away’.

While ‘The People Vs…’ might not have the world’s best lyric, its high-energy refrain of “He’s a bad man” makes for one of the record’s most exciting choruses. Whibley isn’t a great singer, but he holds your attention, almost frothing at the mouth as he spits out words. It’s perfectly functional, aided by some great yells on and a little political bite on ‘The New Sensation’, but sometimes he struggles to be memorable, which is a shame.

Produced by mixed by Whibley, the music packs a punch, yet the vocals don’t always match, often coming off as muted. Nevertheless, the album’s only misstep is when it changes pace for slow song ‘Never There’. It’s heartfelt and inspired by Whibley’s absent father. However the production makes it distant. It also features an unfortunate, clumsy rhyming scheme.

Retaining a streamlined metal-edged pop-punk sound ‘Order In Decline’ sees Sum 41 sticking to what they do best. It might have serious undertones, but it’s a fun and frantic ride.

‘Order In Decline’ by Sum 41 is released on 19th July on Hopeless Records.