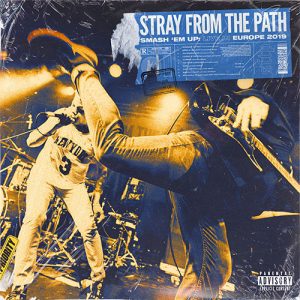 Over the years, Long Island’s Stray From The Path have earned themselves a ferocious live reputation. They’re well respected and have played alongside almost all of the scene’s big players. If you need evidence just look at the rich array of guest singers littering their discography. Having switched to a new label, ‘Smash ‘Em Up: Live in Europe 2019’ draws a line under their recent catalogue and gives a taste of their live show.

Each song was recorded at a different date and venue, which is certainly reflected in the quality. The overall sound is what you’d find on your iPhone after spending the gig mid-pit and you’ll need a few listens just to work out what’s going on. So, while the ten-song collection gives you a feel for their live energy, it has the misfortune of not being overly listenable. However, if fans dig around they will uncover its charms.

The performances themselves are spot-on. Andrew Dijorio’s vocals flow and snap as he spits bile in every line. With songs like ‘Goodnight Alt-Right’ being featured, he really gets to dish out his politically charged lyrics. However, the way his sneery delivery was recorded means when he yells (which is almost all the time) the sound distorts and becomes overly coarse and indistinct. The music can also be harsh and not everything comes across well. While simpler Rage Against The Machine-influenced riffs work, especially on ‘Badge and A Bullet Pt. II’, the breakdown-heavy sections of ‘Outbreak’ end up as a disappointing fuzzy mush. Although a careful listen will reveal guitarist Tom Williams adding flourishes with his effects pedals, adding an extra dimension to the songs.

While the album does a good job of capturing different snapshots of the band in a live setting, it is definitely one for completists. It’s just too vague and unrefined for a wider audience. However, if you’re undecided, all royalties will be given to the Hardcore Help Foundation.