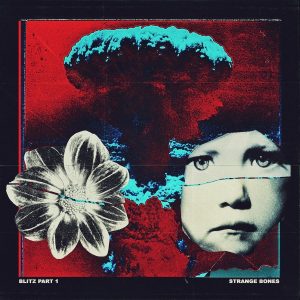 It’s always weird to see a band like Strange Bones pushed so heavily, mostly because it feels like there’s no shortage of acts that could achieve the same effect. Up to now, they’ve been a rather lacklustre garage-rock band without much to differentiate them from anyone else, but given that ’Blitz Pt. 1’ is allegedly something of a radical shake-up, maybe they’re finally making the right moves.

For a start, it’s not like any of that isn’t true; ’Blitz Pt. 1’ is indeed a sizable departure with its embrace of noisy, grinding electronics, and while it certainly is seeing the band moving, they aren’t exactly going forward. If anything, it’s harder to see what they want to achieve now more than ever, especially when this already-brief EP consists of three entirely disparate tracks that, even individually, really aren’t that great. The obvious example is ’Vicious.’ with the slurred delivery and intrusive bass-boosting that wants to emulate an act like Ho99o9, but even in the grinding ’24 Calibre’ and the scrappy riff-rock of ’Give Me The Sun’, the contorted production and overstated roughness just isn’t pleasant to listen to.

If nothing else, it’s more distinct sonically in the vein of a band stretching themselves out in several different directions instead of simply stagnating in one, but that really only highlights how unrefined Strange Bones are in virtually all of their approaches. There’s a seed of something potentially working here, but the roughness and scrappiness is pushed far beyond its means and just feels awkward.

As such, it makes ’Blitz Pt. 1’ feel like a shockingly disposable step in a way that it really shouldn’t be. What should be Strange Bones’ evolution to new places comes across like a messy lack of foresight, struggling to determine what works for them. It makes for a decidedly underwhelming and forgettable listen, and while that’s nothing really new for this band, this EP of all things should at least offer more.