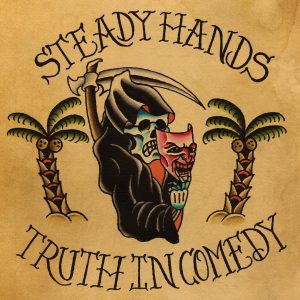 It’s weird to think that Steady Hands’ inception dates all the back to 2012, especially when, within that time, Sean Huber was experiencing his greatest stint of success to date drumming for Modern Baseball. Perhaps even more surprising is that they’ve released a fairly consistent string of EPs since, but with MoBo’s hiatus still ongoing, ’Truth In Comedy’ feels like the nailed-on moment for Steady Hands to establish themselves as a great band in their own right, rather than merely a side-project.

And it doesn’t quite get there, but it’s not a case of not trying. On its own, this is a perfectly robust, melodic emo album, but it’s hard not to view it alongside other MoBo projects, or even other emo bands in general. As a result, ’Truth In Comedy’ can feel a bit basic, especially in the execution; it makes it clear where the penchant for huge, surging melodies came from, but it makes the likes of ’Christmas At The ‘Vous’ or ’Old House’ feel more forgettable than they should.

That said though, there’s still a lot to like about this album, chief among them being the aforementioned melodic focus. The understated, ‘90s-inspired shuffle of ’New Tattoo’ has a lot to like, and taking up a bit more flash and layered composition of ’Indifferent Belushi’ and ’Magazines’ feels like the most watertight way this band has of standing out. Coupled with Huber’s ability for the sort of raw, intensely catchy hook you’d expect from someone like him, and ’Truth In Comedy’ can be a pretty forceful listen when it wants to be.

For now, that’s a good start too; Steady Hands aren’t overextending themselves, and they’re playing to a sound that gives them just enough to work with for now. It’s not mind-blowing at this stage, but if they continue to progress like this, it could be soon.

‘Truth In Comedy’ by Steady Hands is out now on Lame-O Records.