Review: Spielbergs – This Is Not The End 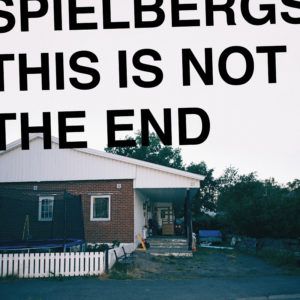 Less a year removed from delivering their promising debut EP, ‘Distant Star’, Norwegian upstarts Spielbergs have quickly followed it up with a full-length in the form of ‘This Is Not The End’. While the former allowed the trio to put down a solid foundation of lo-fi indie rock, naturally, they’ve used this opportunity to explore. Although they don’t quite show it early on.

Throughout ‘TINTE’, the three life-long friends helpless evoke memories of ’90’s rock. Early cuts such as ‘Five On It’ and ‘NFL’ ride on a wave of fuzzed-out guitars with one eye on delivering charming melodies. Given the short span between their EP and this, it’s no surprise three cuts from ‘Distant Star’ appears here. Both the song of the same name, along with ‘We Are All Going to Die’, still have the ability to leave you in a whirlwind of Philadelphia-inspired slacker punk.

As you delve deeper into ‘TINTE’, evidence of Spielbergs‘ expanding range appears. ‘Familiar’ and the brilliantly titled ‘Mcdonald’s (Please Don’t F**k up My Order)’ allow the trio to reign things in with the latter treading on post-rock/shoegaze territory with mesmerising results. Elsewhere, ‘You All Look Like Giants’ steadily builds with sonic density before ‘Bad Friend’ bursts in with urgency, offering a fun slice of punchy indie-punk. Whereas ‘Sleepless’ timidly serves up a sweet acoustic moment of rest bite.

It all comes to ahead with ‘Forevermore’. Combining the melodic boldness with the tranquil tenderness that occasionally appears throughout, it ends the album on a high, signalling this far from the end for Spielbergs.

Through tales of fatherhood and forgotten youthfulness, ‘This Is Not The End’ has allowed Spielbergs to live out their long desired rock n’ roll dreams with grounded awareness, coincidentally crafting a well-honed sound of their own. It’s a debut that matches any potential that preceded it with every listen.

‘This Is Not The End’ by Spielbergs is out now on By The Time It Gets Dark.