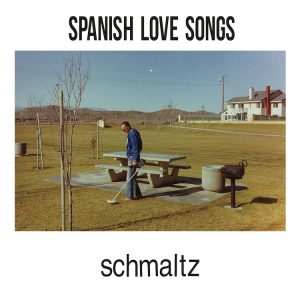 Turning 30 can be a pivotal moment in anyone’s life. You’re supposed to be grown up with responsibilities yet you carry a burden of uncertainty on your shoulders. On ‘Schmaltz’, Dylan Slocum of Spanish Love Songs provides his own, inward take on that moment.

Having spent his twenties in struggling basement bands dealing with mental health issues and a disintegrating marriage, Slocum lays it all in the open. A mournful organ opens the album on ‘Nuevo’, as Slocum comments on his insecurity and lack of personal change while reminiscing about church hardcore shows. It gives way to the explosive ‘Sequels, Remakes, and Adaptations’, a track which provides the first of many defiant fist-in-the-air moments. Together, it’s a one-two punch of anthemic punk that sets the tone for the remainder of ‘Schmaltz’.

From accepting his own unhappiness on ‘Bellyache’ to being unable to change circumstances (‘Buffalo Buffalo’) to being stagnant (‘The Boy Considers His Haircut’), Slocum wraps his words with an infectious, thriving punk skin. Traits such as catchy choruses, group vocals, Meredith Van Woert’s springy keys and Ruben Duarte’s textured drums merely adds to the boisterous output that Spanish Love Songs provide. While Slocum’s quavering delivery on ‘Bellyache’, ‘The Boy Considers His Haircut’ and ‘Beer & Nyquil (Hold It Together)’ gives an element of raw authenticity.

Over the course of ‘Schmaltz’, Slocum finds comfort in his self-deprecating manner. The closing three-song arc of ‘Beer & Nyquil (Hold It Together)’, ‘It’s Not Interesting’ and ‘Aloha to No One’ epitomises this. On the former, he sings “I want to be the one who knows how to hold it together”. While on ‘It’s Not Interesting’, he references learning to love himself yet it’s the acoustic finale that sums up the entire record; “you might be fine but you’ll never be your best.”

If all is right with the world, ‘Schmaltz’ should be seen as the punk record of 2018. It’s an unbelievably heartfelt and addictive album, one that grows with every listen.