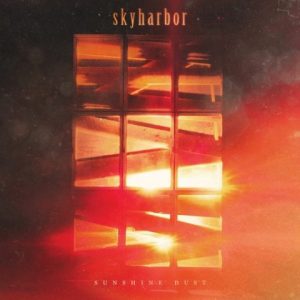 Once upon a time, on a hard drive in New Delhi, guitarist Keshav Dhar created a handful of demos. Those demos caught the attention of Tesseract singer Daniel Tompkins, resulting in Skyharbor, an Indian/American progressive metal band. The rest, as they say, is history. Pretty turbulent history all told.  After releasing two well-received albums, Tompkins left and Skyharbor fell apart. Reformed, with new singer and drummer, they’re about to unleash ‘Sunshine Dust’ and, let’s make this clear, the story is definitely not over.

New singer Eric Emery is an excellent addition. His voice is looser, warmer, more fun, better. That’s a good way to describe the album too. The band have reinvented themselves.  Prior album ‘Guiding Lights’ was the sound of gazing at the heavens, ‘Sunshine Dust’ isn’t, it’s grounded, yet free. By comparison, Tesseract’s music feels calculated to within an inch of its life, here the songs are unrestrained. Skyharbor have embraced a less metal, even rock-driven, approach with djent sounds pared right back. No, this doesn’t mean ditching their old sound, but they’re directing it toward a different path.

‘Dim’ even shows off a bit of guitar violence, something often missing from this type of band, proving Skyharbor can let loose when needed, allowing their music to breathe.  While their previous album was a little heavy – or should that be light – on near-ambient sections, here they’re paired back, saved for when they’re most effective. Such as instrumental ‘The Reckoning’ here, and on ‘Disengage_Evacuate’, new drummer Aditya Ashok really gets to show off. His style is an asset, guiding the band clear of a mechanical heartless sound. True, they flirt with the Tesseract style on songs like ‘Ugly Heart’, but they are far too talented to copy and, besides, Emery confidently sings it as a soaring pop song; a work of mastery and finesse.

With their new line-up Skyharbor haven’t just stepped out of Tesseract’s shadow, ‘Sunshine Dust’ is their best album yet.