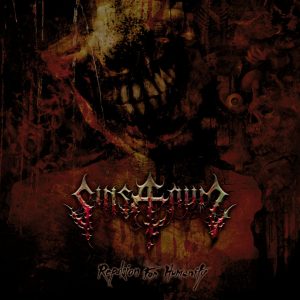 So frequent is the conversation surrounding Sinsaenum as the next “big name supergroup”, that the discussion of egos often dominates their artistic creation. The six-piece may boast some impressive names, including Joey Jordison (ex-Slipknot, Vimic), Frédéric Leclercq (Dragonforce), and Attila Csihar (Mayhem), but their debut album ‘Echoes of the Tortured’ and follow-up EP ‘Ashes’ have all the drive and hunger of a band determined to prove their worth.

As soon as one presses play on ‘Repulsion for Humanity’, its title track reveals that Sinsaenum aren’t taking things lightly for record number two. Packed with frantic blast beats, shredding guitar solos and stone-plated growls from vocalists Csihar and Sean Zatorsky, the track catapults listeners into a rush of heart-pounding death metal.

While ‘Echoes of the Tortured’ is a chasm of lightning-paced riffs split by the occasional 40-second interlude, ‘Repulsion of Humanity’ is a more refined effort with emphasis on catchier hooks. Choruses such as the ‘Rise from the dead, from the kingdom below’ chants on ‘Rise of the Light Bearer’ fit into compact melodies where each syllable could be chanted back by festival-sized crowds. At the same time tracks like ‘Rise…’ and ‘Sacred Martyr’ uphold the frenetic pace of ‘Echoes…’ perfectly.

Even on slower tracks, there’s a dark atmosphere that keeps these tracks multi-dimensional. Joey’s love of Morbid Angel inspires the ostentatious main riff in ‘Final Resolve’ while ‘I Stand Alone’ and ‘Swan Song’ dwell at a slower pace as they serve up marching rhythms with the grandeur of a funeral procession.

Topped with a razor sharp production provided by Francis Castem, Sinsaenum have served up a vibrant update on old-school death metal with ‘Repulsion for Humanity’. Having developed as a tighter unit, this disparate group of musicians have produced a more focused, exciting record. So you can all stop rolling your eyes when you hear the term “supergroup” now.

‘Repulsion for Humanity’ by Sinsaenum is released on 10th August on earMUSIC.