Review: Single Mothers – Through A Wall 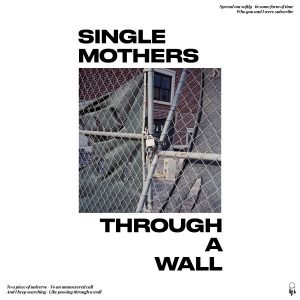 Always a band to tear through members like a chainsaw through cardboard, Single Mothers created ‘Through a Wall’ using a rotating bill of musicians. Vocalist Drew Thompson and producer/percussionist Ian Romano helmed the project, trading demos while on the road touring their previous record ‘Our Pleasure’. The intention, to capture the band’s live sound – Hint; they succeeded.

Much of the music is a frantic stampede of hardcore riffs and tempo shifts with 14 songs spread over 32 minutes. After the relatively gentle bounce of opener ‘Marathon’, all bets are off. Snarling riffs batter you from all angles, resulting in some finely-tuned chaos. However, your enjoyment of the record hinges on Drew Thompson’s unique, sneery voice. Leaning heavily on a marmite piercing yell, he toes the line between effective and irritating.

By the time you reach ‘Dog Park’, where he breaks from screeching to drawl about ‘macchiatos’, you either get it or hate him. Compare with the musically similar United Nations, and the vocals sit high in the mix, dominating the sound. Ironically, on the mid-section of ‘Engine’, he’s buried deeper, an effect like stirring glass into your porridge. You can’t deny Thompson’s brilliance trading yells on ‘Across the Couch’ but it feels like you’re being tested on the angular back-to-back stabbing of ‘Switch Off’ and ‘Catch & Release’.

Sitting at the record’s midpoint ‘Stoic_Pointless’ is a watershed. Sharing the tone of ‘Our Pleasure’, it’s laid back, swaggery and features guitar breaks, allowing Thompson to broaden his range (Imagine Aaron Weiss’ voice on mewithoutYou’s older material). Subsequent songs ‘Tan Line’ and ‘Big Scar’ share this varying pace, benefiting from a wider canvas and post-hardcore feel. Yet, they can’t resist one more ear-chewing blast of hardcore on ‘Signs’. Uncompromising throughout, switching band members sustains the inventiveness, while the top-down approach keeps the assault fiery, focused and to Thompson’s point.

Although its arrival was unexpected, ‘Through A Wall’ is the sonic equivalent of falling into a woodchipper.

‘Through A Wall’ by Single Mothers is out now digitally and will be physically released on 28th October by Big Scary Monsters.