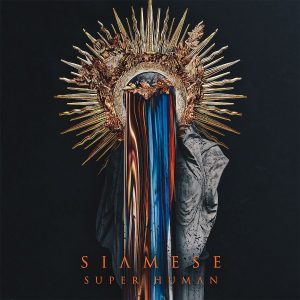 Siamese named last year’s album ‘Shameless’. It was an excellent title. They might be a metal band but they love mid-2000s R & B equally and they don’t care who knows it.  New album, ‘Super Human’ shares the same attitude, but this time, it’s even more brazen, taking those influences further. This lack of scruples really serves the band well, giving them creative freedom.

Plenty of other bands have experimented with fusing the two sounds, but here it is done properly. They aren’t shoehorning breakdowns into songs for no reason. When they stray into heavier territory, the punishing guitars feel natural and earned. Notably on ‘Ocean’s Bed’ sees heavy parts cleverly woven around a massive chorus. In fact, for the most part, songwriter Andreas Kruger has only created music that heightens the R & B elements. He cites his biggest influence as producer Max Martin whose works include hits from Britney Spears, Justin Timberlake and many more. As a result, Mirza Radonjica-Bang’s vocals flow and really hook you in.

The in-house production proves just how comfortable the band are with their sound. Especially as the album’s mid-section really basks in synths, with the drums are the only real reminder of the band’s metal credentials. It’s all satisfying but it’s not until the penultimate track, ‘Unified’, they try something different. The vocals are less laid back, the hooks bite deeper and its agitation makes a sharp contrast to the songs around it, yet it really works.

However, the album’s weaknesses aren’t hard to spot. ‘B.A.N.A.N.A.S.’ is trying way too hard to be quirky and awkwardly leans towards easycore. It’s the very thing the rest of the album avoids so well, sticking out like a sore thumb amongst the more mature offerings.

‘Super Human‘ shows a solid evolution for Siamese. It has a clear and committed approach, which gives good results and some real high points. It’s just a shame not all the material plays on their strengths.

‘Super Human’ by Siamese is released on 24th May on Long Branch Records.