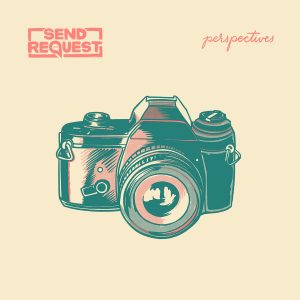 Pop-punk bands are coming thick and fast these days. With such a plethora of groups dropping tracks that are catchy listens but, in all honesty, break no boundaries at all, it often feels like the genre is just reproducing its own content. With that, aiming to take their own slice of glory in the scene are Philadelphia four-piece Send Request with their latest effort ‘Perspectives’.

Trying to pinpoint the exact sound Send Request are going for on ‘Perspectives’ is quite a difficult task, as they flirt between post-hardcore breakdowns not dissimilar to the likes of A Day To Remember, pop-rock sombre-mood tracks in the light of You Me At Six and blaring pop-punk like your Neck Deeps or State Champs.

As the record comes in with a punchy opener, ‘Dr. Dare Rides Again’, you’d think this album has all the makings of a bouncy, feel-good pop-punk record. Yet, after the first few tracks, the album loses a hell of a lot of the momentum it threatened to create. That’s mainly down to how many slower cuts follow on from the album’s emphatic start, which just confuses the pacing quite a lot.


While heartfelt tracks like ‘When Everything Falls Apart’, ‘Trust’ and the six-minute long concluder  ‘If I Stay’ are decent songs on their own, it just feels like the larger collection of softer tracks overall detract from the more aggressive tones of the record. There are heavier influences of post-hardcore which crop up on tracks ‘Talk A Lot’ and ‘Antisocial War’ that gives us a bit more of what we came for, but for the most part, it’s straight 4/4 pop-rock ballads.

Overall, ‘Perspectives’ showcases a good collection of songs, but the loss of energy after the first half of the record is the architect of its own downfall. Unfortunately, for now, Send Request don’t stand out in an already heavily congested genre.

‘Perspectives’ by Send Request is released on 24th August through Sharptone Records.