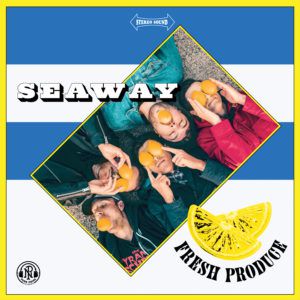 The title of Seaway‘s latest LP is perhaps knowingly misleading, as little of it is, in fact, ‘Fresh Produce’.

The greater part of it sees the Canadian quintet reimagine tracks from 2017’s ‘Vacation’ and re-release recent cover versions, alongside a reissue of 2014 four-track EP ‘All In My Head’. Two new singles do debut, though even one of those first appeared last year. As such compilations generally are, it goes without saying that the record is primarily for existing fans of the band, quenching the between-albums thirst.

The only entirely new track is ‘Pleasures’, but the opener certainly doesn’t deviate from the tried-and-trusted Seaway blueprint. Its dreamy escapism and sun-kissed nostalgia would certainly have been at home on ‘Vacation’, and the instantly familiar shout-along chorus and basic riff will help it slot slap-bang in the middle of summer setlists. ‘Blur’, first heard in 2018, goes through the fairly standard motions of morning-after haze and regret, but similarly to ‘Pleasures’, the sharp melodies are efficient enough.

Of the reworked tracks, ’40 Over’ is the highlight. Already an unsung gem of ‘Vacation’, here it is deliciously packaged as a shimmering power-pop song. An acoustic mash-up of two older favourites, ‘Slam’ and ‘Shy Guys’, promises more than the reality, but alongside the other stripped-down takes, works fine as throwaway camp-fire fun.

Seaway have relatively shrewd judgement when it comes to selecting what they cover, and do Alanis Morrisette’s 90s hit ‘Hand In My Pocket’ justice, while The Cars’ ‘Just What I Needed’ is a good fit.

If you are coming to the ‘All In My Head’ tracks for the first time, the youthful abandon of ‘Your Best Friend’ and ‘Alberta’ may be head and shoulders above everything else, and they never get old. Chances are you have come across them before.

As expected, ‘Fresh Produce’ is worth a look for the firm fans it’s aimed at. For those without prior Seaway knowledge, it won’t be a starting point.

‘Fresh Produce’ by Seaway is out now on Pure Noise Records.