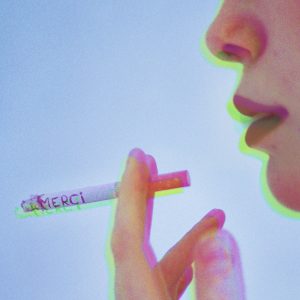 Tyler Povanda’s claim that ‘Merci’, the first full-length release from his group Save Face, is not just an album but a “multimedia art project” may seem pretentious, ambitious or incidental for those new to the band. But it does present an interesting, if far from original aspect to the record. Each track has a video accompaniment that fits into a fourteen-part narrative around ‘Merci’‘s loose concept of tragic addiction and even a named fictional protagonist, Kaleb.

‘If you listened to it yesterday, you can watch it today’ reads a social media post, but ultimately, if you didn’t enjoy the former, you are unlikely to wish to see the tracks visualised. Fortunately, those tracks are, for the most part, of a standard to match and justify Save Face‘s lofty creative ambitions.

The two-minute rip of ‘Bad’ ignites things from the off, and is ultimately the most muscular moment. ‘Blues” finds sharp metaphor when addressing substance therapy – “over-baked and undercooked” – while the slow-burn of ‘Heartache’ is not only a well-placed pace-moderator but destined to become a firm favourite among fans new and old.

Povanda proves himself to be especially engaging in soft moments, with the crystalline stillness of ‘Pour’ somehow evoking Jimmy Eat World’s ‘Hear You Me’ and the opening portion of ‘Love’ utilising the easy but ever-reliable quiet-loud dynamic effectively, emphasising the singer/guitarist’s pained voice.

Chris Aveta and Chris Flannery’s rhythm section shines on the cyclical rise and fall of ‘Nothin”, while the axe work of Phil McGarry and Povanda is solid throughout. Its at its best when simple and adding accessibility (‘Mercy’) as opposed to flashy and unnecessary moments such as ‘Reds’‘ solo.

‘Merci’ doesn’t need the concept videos or vague narrative. One wonders how good a record Save Face could have put together were they only focused on the music – because that music is already sharp, engaging, varied and consistent.

‘Merci’ by Save Face is out now on Epitaph.