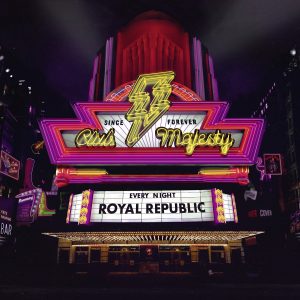 It’s always refreshing to hear a band with an eclectic sound. Royal Republic have taken their love for rock music and combined it with their equal fascination with disco. ‘Club Majesty’ combines a variety of influences to create a new spin on traditional rock music, thinking outside of the genre box.

‘Club Majesty’ features dance bangers that are irresistibly catchy. ‘Can’t Fight The Disco’ expresses the band’s loss at fighting their disco influence. The tune is a captivating one, with funky guitar parts and anthemic chorus. ‘Stop Movin’’ is another club sounding track that uses repetitive lyrics in a catchy way. The use of the vocoder gives the track a very modern flavour too.

Along with club sounding tracks, Royal Republic have also churned out some undeniably infectious anthems. ‘Anna Leigh’ is a saucy and poppy track that wouldn’t sound out of place in an 80s style movie. It really showcases Royal Republic’s talent for creating choruses that will have completely new fans singing back the lyrics after one listen. ‘Club Majesty’ is a energetic journey from beginning to end. ‘Flower Power’ uses disco/funk guitar with really groovy bass lines, just the right ingredients for a groove-centric track.

The sultry ‘Like A Lover’ changes the tone of the album momentarily, going back to rock conventions to create a really sludgy track to the point it sounds like a stadium rock track nestled amongst disco floor-fillers. ‘Blunt Force Trauma’, puts things back in the party mood with its bright use of horns.

Royal Republic have managed to create something that will appeal to anyone who likes to dance (even just a little!) The entire album is nostalgic, ‘Club Majesty’ sounds very modern but also has evident references to genre conventions, with the use of brass sections, synths, grooving bass lines and rhythmic guitar.

‘Club Majesty’ by Royal Republic is released on 31st May on Nuclear Blast Records.