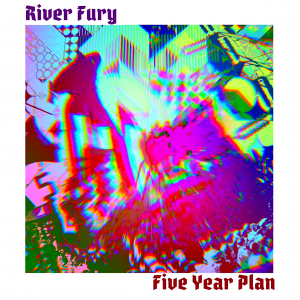 For a band like River Fury, titling their debut EP ’5 Year Plan’ feels as though it ties into more than just a concept about a person struggling to get their life on track. Indeed, it took a stint of slogging around open mic circuits to get a real start, and with members spread between the UK and Melbourne, it’s frankly a minor miracle that they could even get together to record this EP.

It’s not like the effort was wasted either, as while ’5 Year Plan’ definitely shows the rust of a new band finding their feet, there’s enough to go on to suggest that River Fury are moving a fairly auspicious direction. They already prove fairly adept at working with different sounds, rooted in indie-rock and augmenting it with pop on ’Walking In The Sand’, scruffy garage-rock on ’Tupelo’ and even hints of psychedelia on ’Wasteful’. They’re not mind-melting combinations or anything, but for a band looking to add a bit more flavour to their sound, it’s hard to scoff at.

Even among that though, it can feel as though River Fury are playing it a bit too safe. The weediness of the vocals aside, there’s nothing particularly eye-catching here, nor is there a singular moment that could mark this band out as something to look out for. The closest they come is with the swelling balladry of the title track, but even then, it displays a tentativeness that will cause  River Fury to struggle to capture attention, particularly on a longer release.

Still, it’s hard to judge ’5 Year Plan’ too harshly, particularly when River Fury are at least making decent steps forwards for themselves. There’s a lot of work to do if they hope to continue moving in that direction, but it’s not like they won’t ease into that with time.