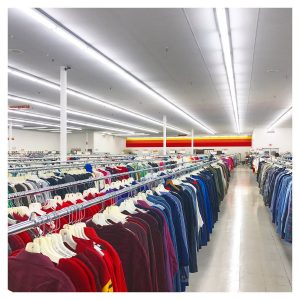 It’s not often you’ll hear an album open with a line like “I think cancer’s gonna’ kill me…”, and less common is the same album leaving you with a genuine, smile at the end of it. But Retirement Party do just that on their debut, ‘Somewhat Literate’. The Chicago three-piece explore vocalist Avery Springer’s tales of mental health and journey into adulthood, crafting an album that ventures into serious topics and tries to find the good in it for both Avery and the listener.

“…Cause I got a real bad sunburn when I was thirteen.” Is how that opening quote is ended on ‘That’s How People Die’, a noisy number that finds tales of anxiety surrounded feedback and crunching riffs. The lyrics glide from macabre to humorous without a second to look back, setting their style in stone on this album’s first few moments.

‘Truck Stop Casino’ catches a tale of self-doubt and discomfort, taking some introspective song-writing with cleverly timed pangs of the guitar and prosodic vocals with the drumming. They manage to do this constantly, reinforcing the vocals with instruments as if they hung to the end of her lines.

The lyrical content could easily have made this project a challenging listen, but their approach makes it easily digestible and accessible, making light of real topics and playing them out in understandable ways. Avery emphasises the importance of friendship when it comes to getting through issues. ‘Passion Fruit Tea’s sharp chorus puts it over employment, submerged in solos and math-y riffs towards the end of its gratuitous closing. ‘The Big Boom’ brings confidence with the chant of “I am better than you know”, making for one of the most directly uplifting moments.

This is an uplifting album, despite the number of lyrics that may seem to challenge that. ‘Somewhat Literate’ recognises a host of depressive events and carries their weight with pride, turning them into art for the world to experience for themselves.

‘Somewhat Literate’ by Retirement Party is out now on Counter Intuitive Records.