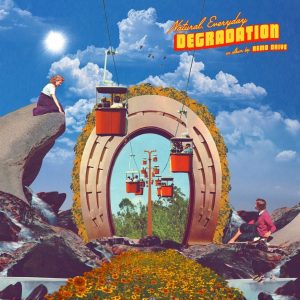 You need confidence and a sense of humour to call your debut album ‘Greatest Hits’. It paid off for Remo Drive and they were quickly snapped up by Epitaph Records. ‘Natural, Everyday Degradation’ picks up where last year’s ‘Pop Music’ EP left off. Quickly, you’ll discover much of their zest has been traded for maturity. It’s a questionable but surefooted swap.

However, working with Joe Reinhart has given the music a bloated, slightly over-full sound. When combined with Erik Paulson’s other, blander singing style it leads to disarmingly middle-of-the-road songs. You’ll have forgotten ‘The Devil’ or ‘Mirror’ while they’re still playing. Thankfully, many of the song arrangements try to avoid this disappointing sag. Everywhere you’re getting tricks such as the thrashing drums on ‘The Truth’ or well-placed guitar squeals, which drag the material up by its bootstraps.

Again, all the songs are robust, but it’s frustrating to hear the band loosen up. They’re far more effective on songs like ‘Halo‘ where simple, muted guitar strums create bite and surprising drive. Faster songs like ‘The Grind’ also crackle with mischief but its chorus is forgettable. Many of them are and it’s a shame there aren’t a few bigger hooks to hold your interest. However, there is variety. When they make things slower and sadder on ‘Separate Beds’ it shows how well their more experimental side can work.

Maturity may have robbed Remo Drive of their sense of fun, but when they let their creativity shine, it can be rewarding. ‘Natural, Everyday Degradation’ is solidly built but struggles to be more than a pleasant diversion.

‘Natural Everyday Degradation’ by Remo Drive is out now on Epitaph Records.