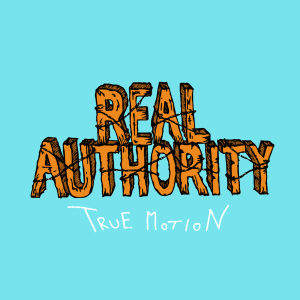 From the wreckage on the London punk scene, Real Authority united to create a new sound. Now, they’ve sharpened it, honed it and unleashed it in the form of ‘True Motion’. Five tracks of forceful, hard-hitting punk leaning heavily on a southern metal sound. Each features its own spin, so while the songs fit together well, each is its own beast.

Catching you out from the start, ‘The Energy’ is a straight-up rap metal track. Muscular and built around a heavy groove, it works well, but is a marked contrast to the high-energy punk-based sound elsewhere. Riffs from guitarists Johann Saul and Jamie Sharp are thrown around amongst huge breakdowns. They can solo too, which makes the latter half of ‘Can’t Face It’ unexpected and exciting. They also mix things up, adding flourishes and stylish squeals to the final track. However, at times songs can feel a little forced together, with elements not quite gelling. Yet, the band are strong together and steamroller through.

Despite this being the band’s first release, they worked with Daly George at The Ranch Production House. It was a worthwhile move; the recordings sound absolutely massive. Especially the opening riff to ‘Party Mansion’ which is heavy enough to level a concrete bunker. Mostly the songs are  polished and listenable but without lacquer. This gives real bite to ‘Back It Up’ where the band are at their most raw.

Vocalist John James Davies keeps his lyrics honest and to the point, especially on ‘Depression Issues’. Combined with his hard presentation, it’s remarkably effective. The muscular sound is ideal for stomping around in the pit to. He also tries a few brief sung passages to add variety, which bear strong resemblance to the sound of Every Time I Die’s ‘Gutter Phenomenon’.

‘True Motion’ has enough bark and bruising riffing to demand your attention. With fast punk roots and fluid metal sound, it’s slightly unsteady on its feet, but strength and swagger mean it hits what it’s aiming for, hard.

‘True Motion’ by Real Authority is released on 26th July on Chapter One Records.