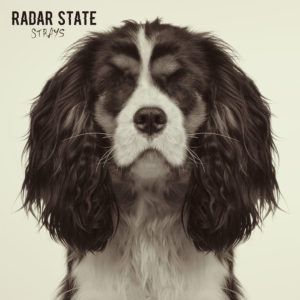 With members of The Get Up Kids and The Anniversary in its ranks, Radar State should be a promising outing for those who loved all things Vagrant Records circa 2000. However ‘Strays’ is far from a throwback to years gone by as it’s clear Matt Pryor and Jim Suptic (The Get Up Kids), Josh Berwanger (The Anniversary) and drummer Adam Phillips (The Architects, The Gadjits) have come together to write some songs and have fun.

It all starts out fairly straightforward and upbeat with the Pryor-led title track along with ‘What A Rebel’ and ‘Anywhere’ quickly forming a sturdy, emo/punk foundation. From their collective experience, Pryor, Suptic and Berwanger’s songwriting is well-tuned and has urgency, resulting in a cohesive record.

Throughout all three trade the lead vocal spot with varied results. Admittedly, the combination of the band’s galloping energy and Pryor’s distinctive vocals (see ‘Self Hurt Guru’ and ‘Good Catholic’) makes it difficult to differ Radar State from his work with TGUK.

However the same doesn’t happen for Suptic as he’s able to deliver a couple of distinctive songs. ‘Damn The Man’ is carried with a vintage rock n’ roll sound dominated by a playful guitar melody. Whereas ‘Making Me Feel’ is a feelgood slice of radio-rock with surf-pop “ooh la la”’s. As for Berwanger, his most notable number is the laid-back, groove-laden ‘Artificial Love’.

Collectively, the quartet’s output is one that thrives on an effortless punk ethos, making for sharp and cohesive that doesn’t let up until the concluding ‘Play For the Game’. Here, Berwanger is complemented by Pryor, delivering a light, reflective moment that counters the relentless melodic rush of everything that came before it.

‘Strays’ may not leave a lasting impression, it somewhat moulds into one after the halfway point, but it’s a noteworthy addition to its member’s discography. Simply put, it’s 13 songs of unambiguous, guitar-driven melodic rock.

‘Strays’ by Radar State is released on 11th January on Wiretap Records and Disconnect Disconnect Records.