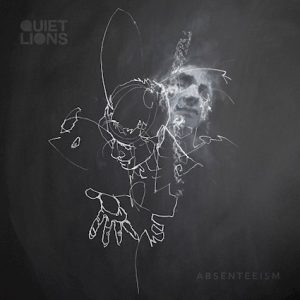 Since their ‘No Illusions’ EP in 2015, Brighton alt-rockers Quiet Lions have been fairly silent, yet behind the scenes there has been plenty of productivity. It now culminates with the release of their debut album, ‘Absenteeism’, which pretty much delivers on their promise.

After the acoustic atmospherics of the ‘Intro’, the album awakens with the classy ‘Echo Chamber’, a quality slice of emotive alt-rock with an insistent riff and an impassioned chorus. It is well-thought out and begins an ongoing narrative on the pervading influence of social media, and its impact on the individual and society as a whole.

‘Wasteland’ is in a similar vein, but such is the obvious thought and commitment that it is very likeable, as is the atmospheric groove to ‘Lighthouse’; its levity to the chorus giving an air of hope to the lost, while the a ‘Capella section provides a stirring moment of uplift. Prior to the interlude, the interesting ‘Youth in Question’ explores public attitudes to mental health issues within the context of the digital age as they recount the true story of a suicidal individual being urged to jump – “Just to be part of the crowd / Goading him to hit the ground / And as he reaches out to touch the sky / You share around”.

While the first half of the album is the sound of a band deep in their comfort zone, the second half sees them spread their wings a little. ‘Arc of the Horizon’, for instance, has a big riff and a harder edge with an air of urgency to the killer hook. It’s followed by the meandering ‘Chancer’ with its superb chorus and rousing climax and then the excellent ‘Epitaph’, which builds into a seriously classy tune showcasing Michael Williams’ vocal versatility. ‘Powerless at Sea’ closes a highly competent debut album with the brooding atmosphere of its critique of the digital landscape and its corrupting influence.

All in all, ‘Absenteeism’ is a resounding success as QL demonstrate quality songwriting and the sound of a band with a strong identity. With deeper exploration into their darker corners they could be really special.

‘Absenteeism’ by Quiet Lions is released on 14th June on Lonely Voyage Records.