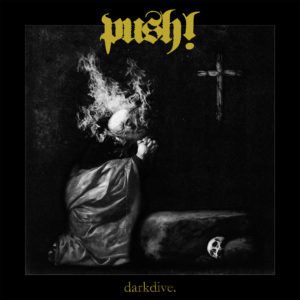 ‘Dark Dive’ is the third album from Push!, a quintet from Lisbon, whose, metal-tinged hardcore offers up a battering selection of pulsating riffs. The eleven tracks on offer here are competently delivered, making for a punchy record of head-banging tunes that make for a likeable listen.

A minute of bass-heavy riffing on ‘Intro’ quickly segues into the slow grind of ‘Free at Last’, its slight chugging riff and shouted vocals making for a heavy, if somewhat disjointed, introduction.

There is a slightly off-kilter feel to the first half of the record as they switch from punky thrashers like ‘Denial and Envy’ to the slow grind of ‘Dark Dive’. Although its chugging riffs eventually kick up to a mosh pit friendly finale with classy time changes, offering a hint of what they are capable of.

However, it is the second half of the record where they really nail some classy tunes. After the two-minute interlude of the atmospherically bassy ‘Left With Memories’, ‘With Love’ kicks in with a punishing opening riff, before drifting into a Suicidal Tendencies-esque skate-core groove. It’s heavy, it’s hardcore, it’s ballsy and features some smoking guitar work.

The textured ‘Cuffed to Yourself’ is another high point; the doom-laden riff and bass throb picking up into a groove-filled riff that cuts back and forth before the wildly manic mosh of the second half.

In general, the record is pretty hard and heavy and great for letting off steam. The way they throw in plenty of tempo changes to keep the arrangements fresh is another positive. Despite the occasional track like ‘Pitfall’ coming off a little disjointed, when they do get it right, like on the sinister downturn in ‘Keep Silent’, they really nail it.

Push! may not be about to change the landscape of modern rock, but they have delivered a bone-shaking, steam-blowing frenzy of hardcore fury that’s well worth a listen.