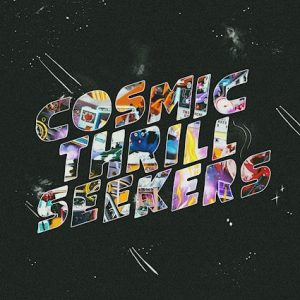 Entwined with The Wizard Of Oz, ‘Cosmic Thrill Seekers’ sees Prince Daddy & The Hyena aiming to prove they’re more than just a punk band, adding depth you might not expect. The conceptual undertone of the album comes from lead singer Kory Gregory’s struggle with mental health, while the album explores the heart, brain and roar of the Tin Man, Scarecrow and Lion from The Wizard Of Oz. However, it is not all that clear when listening to the album.

The album starts with a relaxing piano and acoustic guitar combo. ‘I Lost My Life’, doesn’t hint at a very punky sound, but this is all shattered when the vocals come in. The strained sounding lead is pretty much a constant throughout ‘Cosmic Thrill Seekers’. ‘Slip’ follows this trend, with screaming vocal takes that can either make you feel like headbanging or put you on edge. It would be more effective if the almost retching sounding vocals were used more sparingly, it loses its impact otherwise.

The way that PD&TH’s tracks contrast musically and vocally can be jarring. For example in ‘The Prototype Of The Ultimate Life Form’, the relaxed vibe of the track (clean arpeggiated guitar and organ) clash with the harsh vocals. It would be more appropriate to have the vocals change dynamically when the instrumentation does. It can be done, as the softer side of PD&TH is shown on ‘Trying Times’.

‘Cosmic Thrill Seekers’ exhibits varying instrumental arrangements. The use of a ukulele on ‘Cosmic Thrill Seeking Forever’ and glockenspiel on ‘Dialogue’ is refreshing. It shows depth and a willingness to depart from the comparatively simple nature of punk. Ultimately, it keeps the album from being monotonous.

Conceptually, ‘Cosmic Thrill Seekers’ is an expansive albeit slightly confusing task yet admirable. While the over-reliance of Kory Gregory’s abrasive vocals becomes a hindrance to a record that has so much promise.