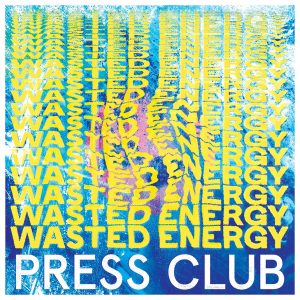 ‘Late Teens’ – the debut LP from Melbourne indie-punks Press Club – was a riotous statement of intent. With huge choruses backed by stirring instrumentation, the record saw the four-piece breakthrough onto the international stage. Now, one year later, their second record picks up where the first left off.

With ‘Wasted Energy’, any concern that Press Club wouldn’t be able to follow up such a strong start is put to rest. As soon as the first refrain of ‘Separate Houses’ kicks in and embeds itself into the listener’s brain, it becomes clear that this band are here to stay. Vocalist Natalie Foster is (once again) the album’s driving force, and she strikes a fantastic balance between earworm-inducing melody and a wonderfully charismatic punk snarl.

In many ways, this record is a continuation of ‘Late Teens’ – just with a far better production job and a lot more bite to it. It’s encompassed by the same late-summer-evening vibe, sketching a vivid portrait through each track in the same way that Aussie peers The Smith Street Band do. Still, the lyricism is wider in scope this time around; focusing as much on socio-political themes as introspective, personal ones. With such impassioned delivery, it works even better.

The instrumental prowess on display here shouldn’t be overlooked either. The seemingly inexhaustible vigour that fuels ‘Wasted Energy’ comes largely from a picture-perfect rhythm section, and Greg Rietwyk’s guitar leads act as hooks nearly as often as the vocal lines do. There’s a level of aggression to this album that we didn’t see on the debut; songs like ‘New Years Eve‘ and closer ‘Twenty-Three‘ fire along at such a frantic, breathless pace that it seems almost that the vocals can barely keep up.

‘Wasted Energy’ isn’t just a sophomore album better than most. It also sees Press Club zero in on a distinctive, irreplicable sound, and cement their place as one of the most exciting young prospects in rock music today.

‘Wasted Energy’ by Press Club is released on 16th August on Hassle Records.