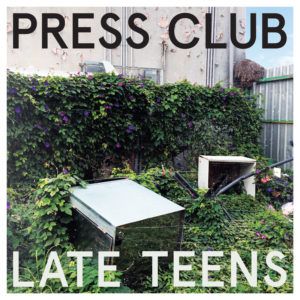 Late teens can be a subjective time period in most people’s lives. For some, it can be a snapshot of life at its most reckless and carefree, and for others, they’re filled with periods of angst and anxiety which still haunt your mind in later years. Listening to ‘Late Teens’ from Melbourne newcomers Press Club, one senses they understand how it feels experience the latter experience of adolescents.

With plentiful amounts of catchy melodies captured by live one-take recording sessions, ‘Late Teens’ thrives on these bursts of spontaneity. Natalie Foster keeps listeners inspired during opener ‘Crash’ as her voice keeps building in tension through its verses and pre-choruses before dousing us in the bittersweet lushness of its chorus message; “I’m not in it I’m always quitting, I’m always on the other side”.

Although it’s easy to get lost in the hazy buzzsaw guitar-heavy production, Foster proves herself the centrepiece of the album. Her thought process in these lyrics tends to fluctuate between yearning optimism (“I can’t relate to letting all your dreams go”) and insecurity (“My young heart, there’s nothing to say but I’m messed up”). As a lyricist, one can tell she draws from life experiences that have resulted in trauma and pain, in both relationships, isolation and severe loss.

But it’s knowing this, and hearing the sense of hope that shines through the songs regardless that makes ‘Late Teens’ such a triumphant listen. In her confrontation of struggles from the past, Foster can hold her head high and tell herself she doesn’t need to let her doubts consume her. And by crafting this ultimately positive mindset into sporadic bursts of frantic punk rock, Press Club are sure to inspire countless people looking for that same hope, no matter what age they are.

‘Late Teens’ by Press Club is out on 25th January on Hassle Records.