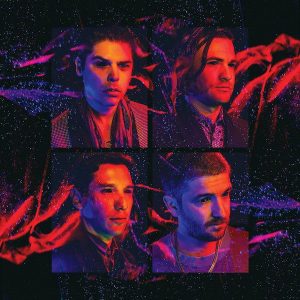 Plague Vendor’s third album ‘By Night’ might be their best yet. The raw garage punk of the California band’s previous work is still present, but it’s more refined than what we’ve seen from them before; slightly more mainstream-sounding in parts too.

Frontman Brandon Blaine described the process of writing album opener ‘New Comedown’ as seeing “lots of colours and themes that were coming through” and this variety definitely seems to manifest itself in the album. There are songs such as ‘All Of The Above’, which have a cleaner, straightforward alternative sound, juxtaposed with the likes of ‘Nothing’s Wrong’, a ferocious punk anthem that sees Blaine shouting that “There’s nothing wrong with me/There’s something wrong with you”.

The way in which Plague Vendor can chop and change between nihilistic noise-punk and more luminous alt-rock is what makes ‘By Night’ so appealing. There’s a clear influence taken from proto-punk – Iggy, MC5, New York Dolls – but there are also comparisons to be made with contemporary acts. They’re reminiscent of the likes of Drenge and METZ on here, with a bluesy noise rock take on punk.

As the album goes on, there’s a slight dip in quality in the middle – ‘White Wall’ and ‘Night Sweats’ feel more generic than the rest of ‘By Night’. Luckily, Plague Vendor get back on course with the energetic ‘Pain In My Heart’. Jay Rogers’ fast-paced, frantic guitar work intersects with Blaine’s fraught vocals, making for a welcome aural assault. It’s followed by ‘Snakeskin Boots’, the intro of which consists of a capella sprechgesang from Blaine before Michael Perez joins in on bass, providing an altogether foreboding atmosphere. It’s one of the more experimental tracks on ‘By Night’, but it definitely works.

It’s an altogether impressive album. Plague Vendor have taken a visceral proto-punk sound and merged it with contemporary alternative rock – the resulting sound makes for one of the better punk albums of the year so far.

‘By Night’ by Plague Vendor is released on 7th June on Epitaph Records.