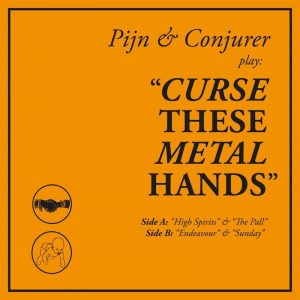 Pijn and Conjurer are two of the most exciting acts on the UK metal scene and the prospect of the two together is tantalising. The Holy Roar labelmates first collaborated at last year’s ArcTanGent Festival; now it’s taken a step forward and the four-tracks are as massive as expected, yet also surprisingly uplifting and life-affirming.

‘High Spirits’ opens to lazy chords and easy percussion drifting on a summer breeze, until the first soaring riff kicks in to carry you away on a spine-tingling flight of fantasy. They then sing of being in high spirits and a state of joy, albeit in voices from the lungs of hell melting into enormous heavy riffs. It’s epically heavy but imbued with a disarming sense of joy making it nothing short of stunning.

‘The Pall’ follows more jaggedly, but soon gathers intensity. It’s darker, but there’s a sense that they’re really enjoying playing together. As the atmospheric mid-section gives way to searing guitar work, there’s a cathartically doom-laden feel that culminates in a curiously upbeat riff to end on a note of positivity.

The intuitive arrangements have an impeccable sense of timing throughout, making each momentous long, face-melting track engaging to the end. Even when they go short, as on the two minutes of ‘The Endeavour’, they still deliver in filthily heavy style.

‘Sunday’ closes proceedings with a more progressive feel, riffs cut back and forth until a richly atmospheric section gathers into a pure emotional release. Blazing enviably timed riffs are spliced together with a depth few bands achieve. When the wall of sound gives way to soothing acoustics, all your troubles drift away, until it builds back up on the massive motif riff to a soaring finale.

’Curse These Metal Hands’ is a glorious record– once again the UK’s most exciting metal talent succeed in taking the genre to another level. It’s joyous, cathartic, and heavy as fuck – go lose yourself in 30 minutes of pure metal indulgence.

‘Curse These Metal Hands’ by Pijn & Conjurer is released on 16th August on Holy Roar Records.