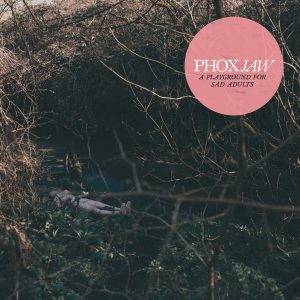 Bristol’s Phoxjaw hit it hard last year. Creating a buzz with their devasting live shows and unleashing ‘Goodbye Dinosaur’. With its blend of dark atmospheric post-hardcore, the EP caught the attention of Hassle Records. Hardly surprising then, the follow-up, ‘A Playground For Sad Adults’ is in many ways a more confident reprise of their debut. That’s no bad thing.

The EP’s title couldn’t be more fitting. Almost everywhere you’ll hear arpeggios that bring to mind eerie playrooms in Victorian houses. It’s an uncomfortable atmosphere that fits perfectly with their love of angular riffs and Danny Garland’s varied, yet unsettling vocals. At its most focused, it recalls Pulled Apart By Horses with its rock, grunge, and hardcore elements. Especially on ‘Monday Man’ with its huge driving guitar parts.

The band’s real strength is their ability to cook up a witches’ brew of dark tantrums and mood swings without losing focus. In fact, the songs on the EP’s first half follow a similar template. Ladling on riffs while trying to slip the rug from under you with weird asides, only for the riff to come back harder and heavier. ‘Melt, You’re The Face Of Wax’ showcases this perfectly. Its eerie jack-in-the-box verses work a treat. Similarly, ‘Whale, Whale, Whale’ is glorious noisy but ends up digging itself a momentum-sapping hole. While it works here, it could easily sink a longer-form record.

The EP’s latter half is far more challenging. The songs are more thoughtful and if anything, weirder. Everything about ‘The Curse Of The Button Man’ is gleefully off-kilter like a nightmarish merry-go-round. ‘Bodiesinthewalls’ also meanders along, lurching from sound to sound while Garland makes rhymes about random objects. It’s great but is very much the band doing its own thing, completely justifying comparisons to Cave In.

Consolidating what came before, ‘A Playground For Sad Adults’ squeezes more dark magic out of Phoxjaw’s sound. Making for an unsettling, moodier EP, which will no doubt thrive in the live arena.

‘A Playground For Sad Adults’ by Phoxjaw is released on 5th July on Hassle Records.