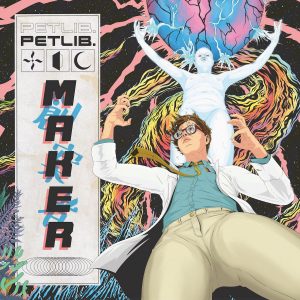 Under the moniker of Pet Library, Tim Andersson and George Milner firmly sat in the realms of UK DIY emo. However, with the addition of Kieran Alexander, they’re now a band reborn known as Petlib. It sees the trio take things in an entirely different direction as ‘Maker’ is served up as an experimental post-rock odyssey. You’d best prepare for a bumpy ride.

From the outset, the album is a deconstruction of genre and instead, it follows a concept. Each song does feel distinct while being part of a larger whole. The story concerns a scientist who creates a universe within their own mind and becomes a god. It’s all very unsubtle, especially as large passages are literally readout. It is very effective on the druggy ‘Amnesia’ and the more expansive ‘Ache’, but can also be unintentionally hilarious.

It’s a restless and unfocused collection. The runtime is largely an ice age of tinkling pianos. Yet, ‘Reflection’ suddenly erupts into jarring mathcore, like Botch having a seizure. This wild heavy sound continues on ‘Return,’ where sheets of synths add an extra dimension. Before long they’re exploring nightmarish dreamscapes on ‘Disintegrate’ and post-hardcore riffs on ‘Wounds’. Nothing seems off-limits resulting in the kind of odd record Mike Patton might make.

The only time the band show restraint is the album’s runtime. Strange ideas run wild. For example parts of ‘Tyrant’ fade out, like the recordist grew tired and walked away from the band. Hence, it’s a challenging, uncomfortable listen. You do find great parts, but they are few and far between.

Despite covering a lot of sonic ground, the album isn’t always as deep or meaningful as you might hope. However, not knowing what will happen next keeps you listening and curiosity does make you return for more.

Hugely ambitious, ‘Maker’ is an experimental art album, impossible to pigeonhole, hard to love and difficult to listen to. However, art should explore and provoke, in that respect, it succeeds.

‘Maker’  by Petlib. is released on 9th August on Beth Shalom Records.