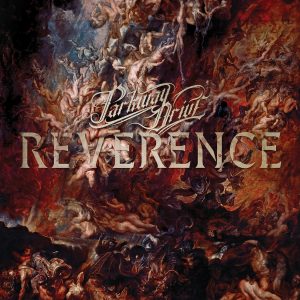 “Through blood, sweat, tears, we’re still here, unbreakable”. The final lines of ‘Ire’ closing track ‘Dedicated’ was Parkway Drive stating their mantra. In a society that tries to keep everyone on their knees, turning negativity into strength is how to push back.

Sixth album ‘Reverence’ may open with barren desert soundscapes and acoustic chords reminiscent of ‘American’ era Johnny Cash. But as Winston McCall’s speaks about finding God and “burying him with the ones he keeps” and ‘Wishing Wells’ detonates into metalcore fret-pummeling layered with gold-plated lead guitar flourishes, ‘Reverence’ quickly sees Byron Bay godfathers pick up where ‘Ire’ left off.

Themes of anger, loss and by despair always been the Parkway standard, but on ‘Reverence’ this overall feeling is less ‘Killing With a Smile’ and more reflecting with a sigh of regret. Championing this maturation process most is Winston, who completes his metamorphosis from ‘Ire’ into a more versatile frontman.

Whether it’s his gruff authority that dominates the swashbuckling ‘Prey’ or shooting urgency that rips through ‘I Hope You Rot’ like flames on petrol-doused curtains, McCall’s presence across ‘Reverence’ lends itself to the emotional dexterity each track thrives on. Most significantly, his first ever clean singing on ‘Shadow Boxing’ and traumatic closer ‘The Colour of Leaving’ shows Winston at his most exposed and vulnerable. A man that many have considered the face of mosh and brutality in heavy music, hearing his frail “I saw death’s face today as he took my friend away” refrains paired with a string quartet backdrop is tender and heartbreaking.

‘Reverence’ could have broken Parkway Drive and torn their mantra to shreds. The physical and mental pain that builds up these tracks’ foundations could’ve left them exasperated and drained, but they’ve persevered and turned despair into the finest album of their career. These songs are anthems of struggle, loss, and retribution, destined to turn Parkway into every festival’s confirmed headliner.

‘Reverence’ by Parkway Drive is released on 4th May on Epitaph Records.