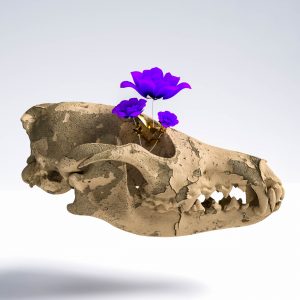 Formed in 2013, Atlanta-based band Panicwolf admit it hasn’t been easy getting off the starting blocks. Debut EP ‘Paralyse’ is the result of sporadic writing sessions and numerous stops-and-starts. As you’d hope with songs they’ve been chewing over for a good four years, there isn’t an ounce of gristle.

Despite describing themselves as “hardcore”, Panicwolf have a sound that isn’t spontaneous or crazed, it’s varied, thoughtful and more of a calculated assault. Beginning with ‘Sink’, everything feels solid. A rousing yell fades in, instruments slowly enter, the whole song builds to a satisfying clean-yet-gritty hook. It’s an effective opener, but it doesn’t prepare you for what comes next. ‘Bury Me’ sees the band flexing their creative muscles, then punching you in the face with a mix of power and clever melody.

Luke Stevens has the type of throaty yell favoured by bands like Norma Jean. Similarly, the way he wrings melody from the lyrics is impressive. Interplay with second vocalist (and drummer) Collin Bennett is the band’s real secret. The two voices thread together finding or forcing hooks from each other. It’s brilliant, akin to ‘Define the Great Line’-era Underoath. Similarly, guitarist Patrick Lowry draws on Underoath’s sound, however, his stripped-down single guitar attack is more ruthless, keenly natural, explosive or indeed dissonant.


Despite walking this similar path, especially on ‘Naïvety’,  Panicwolf never become imitators. Just listen to ‘Misery’, which opens like a car crash of rabid staccato thumps and off-meter squealing guitars, then throws in riffy chorus for good measure; you can’t help but grin.

Okay, the fade-out at the end of ‘Demon Speak’ is so rapid it sounds like someone leant on the volume knob, but throughout you can’t fault the EP’s sound. Transitions land with just the right amount of thump proving Lee Rouse and Joshua Landry handled the production with aplomb.

‘Paralyse’ took a while to see the light of day, but that hasn’t dimmed its potential.

‘Paralyse’ EP by Panicwolf is released on 24th August on Pale Chord Music.