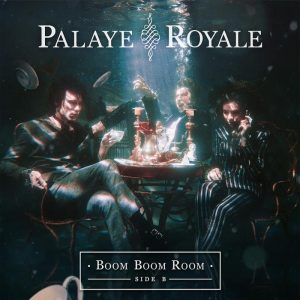 Self-declared “art rock” band Palaye Royale may already have a dedicated cult fan base, but the big test of their staying power in the industry comes with the release of second album ‘Boom Boom Room (Side B)’. In order to silence the critics shrugging them off as a wannabe My Chemical Romance, they need to up their game and take their songwriting to the next level.

Although ‘Side A’ had its fair share of bangers, Palaye Royale went for quantity over quality last time out. Thankfully, ‘Side B’ cuts off the fat, making for a much easier listen to take in. Opener ‘Death Dance’, however, isn’t exactly the most original sounding track to kick off with and doesn’t bode well. Complete with the cheesy lyric “I’m dead inside” and utilising the same “oh no, no” hook-line which was already well overused on their last album, it’s not a great start.

‘Teenage Heartbreak Queen’ is much better, with a good singalong chorus and future single potential. Meanwhile ‘You’ll Be Fine’ has that bouncy, infectious beat, along with a haunting middle section and melody. It shows off Remington Leith’s vocals at his most raw and rocky, and is one of the strongest tracks off the album.

‘Dying In A Hot Tub’ takes things down a notch and sounds like a cross between Arctic Monkeys and MCR, but it’s actually pretty cool without being cheesy. ‘Love The Void’ starts out as an emo ‘Lucy In The Sky With Diamonds’ but soon falls into a routine Palaye Royale song (except with Christmas bells).

Overall, Palaye Royale are showing some level of development and maturity here, as well as a better understanding of their craft, although they still remain one of those guilty pleasure bands you don’t really want to admit to listening to.

‘Boom Boom Room (Side B)’ by Palaye Royale is released on 28th September on Sumerian Records.