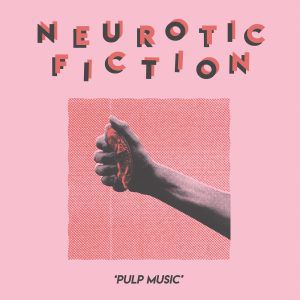 If the description “angular post-punk” was a band, it would be Neurotic Fiction. The Bristolians’ debut is an interesting listen, with vocalist Jessie Pfunder sounding like Echobelly’s Sonya Madan if she fronted a groovier Blondie.

Making for a solid start, second track ‘Collateral’ brings the album to life. Its frenetic math-rock tests the limits of how much energy can be fitted into two minutes, getting more energetic before coming to an abrupt end. It’s an impressive statement of intent from the band which perhaps should have been the album opener ahead of ‘Social Animal’.

‘Generals’ is another firm song, with a retro sound that fits Pfunder’s yearning vocals. The jangly melody is reminiscent of 80s indie, and although it’s not the most electrifying piece of music, it’s warm and inviting, in contrast to the tracks before it.

Neurotic Fiction are at their strongest when they mellow out. On the dream-pop inspired ‘Bell Curve’, the vocals and guitar riff intermingle with impressive effect, while the shoegaze-y ‘Blue Slush’ provides an opportunity to sit back and appreciate the band’s artistic flair. It never truly bursts into life, but that’s not an issue, as it more than fits the tone of the record.

Unfortunately, there’s a bit of filler surrounding the stand-out tracks. Latest single ‘Loose End’ is rather forgettable – more B-side material than album-worthy, it feels as if it’s slightly stagnant. ‘Meaning Of Lyf’ is also pretty unremarkable, lacking any real edge. Final track ‘Pulp Music’ is also disappointing; at 1:31, it feels tacked on and could have been incorporated into another track.

‘Pulp Music’ is a decent album overall, but at times seems a little style over substance. Neurotic Fiction have got a number of things right – particularly considering that this is their debut effort – but there’s still much to work on going forward.