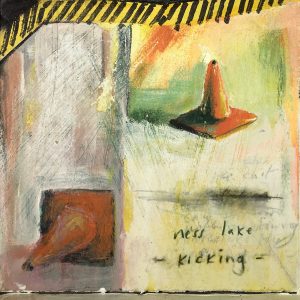 Anyone familiar with Chandler Lach’s previous output might be somewhat taken aback by Ness Lake. Whereas his time fronting Swordfish saw his name put to the sort of rousing indie-punk that bands like The Menzingers would go on to perfect, Ness Lake are a much different proposition. They are comprised of ideas that wouldn’t fit with any previous projects, all with an unavoidable inward focus.

Couple that with the exquisitely arranged and sometimes heartbreaking shoegaze and emo arrangements, and ’Kicking’ can be a truly affecting album, both in its sense of scope and its emotional rigor. ’Perfect Spirals’ and ’Bed Like A Grave’ highlight the flaws in Lach’s voice – flat and morose with a noticeable distance – but it makes the grief and loneliness all the more powerful. As does the fragile, ramshackle acoustic guitar on ’Cheery Menthols’. And with the liquid, washed-out tones that dominate, there’s a dreamlike feel to Lach’s self-examinations that are genuinely compelling.

Of course, this sort of writing tends to achieve that by itself, and ’Kicking’ is no different. The most stark thing about it is Lach addressing himself in both the first and second person. This lends a huge sense of weight to ’Sitting’ and ’Salt Stains’, where he takes himself to task with an accusatory voice that’s, most likely, only in his head. And with the lack of immediacy the album offers, these emotions parse out further and further each time only making the resonance so much deeper.

That’s probably the greatest strength of Ness Lake, and why ’Kicking’ is just begging for repeated listens. Even if it’s not for everyone (and make no mistake, it certainly isn’t), the amount of depth and detail here is almost staggering, and definitely worth delving into. This will undoubtedly be one of 2018’s hidden gems, and deserves all the praise it receives.

‘Kicking’ by Ness Lake is out now on Take This To Heart Records.