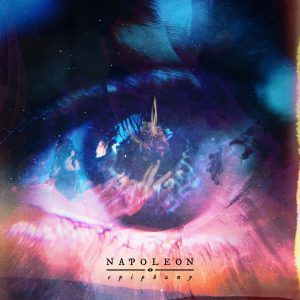 Since the release of their debut, ‘Newborn Mind’, in 2016, Napoleon have spent the better part of the last two years presenting their sound to the masses. The band’s appeal came more from their technicality, rather than the songs themselves; while they are a marvel to listen to, not many of the songs were too memorable. Still, though, the promise of new music has kept many following the band, and now, with numerous festival slots and tours with the likes of Counterparts and Polar under their belt, it’s time for the follow-up, ‘Epiphany’.

Straight out of the gate, ‘Godspeed’ displays that technicality twinned with melodic choruses, but there’s a subtle difference this time around. It appears again on ‘Ignite’, and there are hints of it on ‘Diamond in the Rough’ and ‘Zeitgeist’. An apparent focus on groove has wormed its way into ‘Epiphany’ and has burrowed deep into some of its cuts. This creates recognisable features, even if they’re fleeting. The intense bass slapping on ‘Zeitgeist’ could be one of the moments that defines this album, and potentially Napoleon’s entire oeuvre to date.

Still, through all the riffs, the meandering harshness of the vocals, and bouncing grooves, there’s something missing here. Much of the album feels too cavernous around the guitar-work, as if every song is too focused on the leads, leaving these empty, gaping holes of nothingness.  Closing track ‘Dream Sequence’ is the biggest culprit of this.

Drowned in its own complexity, ‘Epiphany’ is a tiring listen. There are too many layers to listen passively, but not enough variety to listen actively. It leaves little desire to flip the disc back and start the album again.

Nevertheless, Napoleon‘s skill is nothing to ignore. Even if the crafting of their songs leaves something to be desired, they’re still a band to that leaves eyes wide and jaws dropped. They can be better than this, but the key to unlocking how is still a little way off.

‘Epiphany’ by Napoleon is out now on Basick Records.