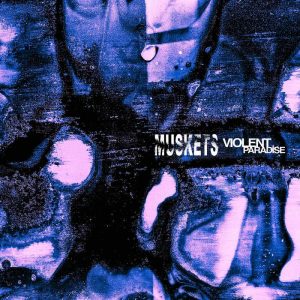 The latest rise of grunge has given plenty of bands a platform they might not have previously had, but it can feel as though Muskets haven’t fully taken advantage of it yet. That’s not entirely their fault – they’ve been putting out material at a fairly consistent rate for a few years now – but they’ve yet to have that one definitive release to grip the masses under their belt, and ’Violent Paradise’’s surprise release sets up that trend to disappointingly continue.

It’s a shame that it likely won’t pick up that much attention because, by all rights, it should. Muskets have the sort of hazy, melodic knack towards songcraft that’s always had a lot of potential. When given to the washed-out slither of ’Empty On Cigarettes’ or haunted, ramshackle acoustics of ’Natural Selection, they’re the signs of a band looking to maximise the potential of a sound that’s quickly growing stale. They certainly aren’t averse to falling into those traps themselves (see the title track for the most definitive example of that), but for the most part, Muskets’ experiments on this EP yield generally strong results.

Of course, it would be nice to see how Muskets would continue branching out on a full album rather than just get snippets of it here, but even so, there’s plenty that resonates here regardless. Alex Cheung and Daniel McKenna still have the winding vocal interplay that works so well against the heavier backdrop of ’Killjoy’, and the thicker guitar tone has the rumble and snarl to do plenty within modern rock’s more organic scenes.

It’s defiantly characteristic of Muskets’ previous work, even in its more experimental flourishes, but ’Violent Paradise’ feels like a stronger consolidation of those elements than before. There’s more potential to be built on here, and while there’s still a bit of sprucing up to do, it’s easier than ever to see where this band could now go to reach the greatness they’re capable of.

‘Violent Paradise’ EP by Muskets is out now on No Sleep Records.