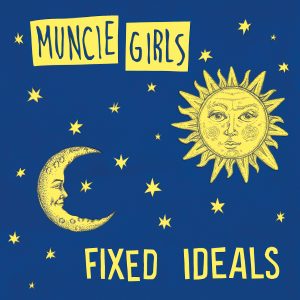 It feels a lot longer than two years since Muncie Girls released debut ‘From Caplan to Belsize’, a testament to how quickly and hard fans fell in love with the band. New album ‘Fixed Ideals’ takes what they did before and makes it even better, giving us thirteen intelligent, joyful tracks.

Muncie Girls want us to know the importance to be found in the mundane. Opener ‘Jeremy’ mentions a hatred of Jeremy Clarkson but what it represents – “you’ll wonder why you gave into right-wing fears” – is far more serious. It might not immediately feel like the band are singing about the bigger picture, but it’s the little things that make up our daily lives that mount, one by one, they’re pointing out to us.

Something as simple as waiting for a doctor’s appointment turns life-changing on ‘Clinic’, an attack on the lack of mental health support available and the nonsensical advice found in its place. On ‘Picture of Health’, mental illness becomes a singalong refrain: “I was thinking maybe you could look after me / I could do the same for you just for a while ‘til we’re back on our feet”. Muncie Girls have plenty to say and they’re not leaving anything out – don’t be fooled by the buoyant melodies.

There is some hope, however. ‘In Between Bands’ reminds us of the simple pleasures in life, as Lande Hekt remembers listening to Sleater-Kinney in between bands playing, there’s a camaraderie among the misery on ‘Laugh Again’ and ‘Bubble Bath’’s sound effects are bound to raise a smile.

Aside from the message, Muncie Girls sound lovely. Lande Hekt’s soft, powdery vocals are heard most prominently on slower numbers ‘Falling Down’ and ‘Hangovers’, sitting seamlessly alongside the other songs’ surfy guitars and upbeat pop inclinations.

‘Fixed Ideals’ is a poetic, political album that’ll force you to look inwards and outwards. Listen to it immediately and play it to all your friends.