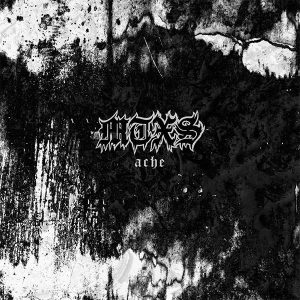 On their debut album, ‘Ache’, Essex-based hardcore newcomers MTXS join the swathe of young British bands making heavy music exciting again. Clocking in at just under twenty-five minutes, this frenetic burst of destruction has far more depth than it might first appear.

For the majority of the record, MTXS revel in creating moments of sheer brutality. The band expertly take the hard-hitting, breakdown-centric style of recent popular hardcore acts such as Knocked Loose and Code Orange and make it harsher by emphasising the low end. Their groove-laden guitars are tuned further down than the seventh circle of hell, but the monstrously fuzzy bass is arguably this album’s crown jewel. When everything around it cuts out (on a song like ‘Silver Skin’), ‘Ache’ becomes an entirely more threatening, scuzzy beast.

The album’s title track sees the band take a break from the pummelling brutality of the first seven songs. It’s still heavy, of course, but in a different way – the use of space feels foreboding and atmospheric, especially when combined with such a doomy tempo. Frontman Paul Collins takes centre stage here, and his frenzied vocals lend the song a palpable sense of urgency.

After this respite of sorts, the band return to outright fury. Penultimate track ‘Liberation’ features a brilliantly executed, crowdkill-inspiring breakdown with the self-indulgent mosh call of “M! T! X! S!”, which seems hand-crafted to get fans clambering over one another to grab the mic. ‘Plague’, the record’s closer, is equally intense, but also hints at some sonic ideas which could make them more accessible – the backing vocals on the chorus make for an effective (and even catchy) hook.

It might not reinvent the wheel, but MTXS have produced a great debut LP in the form of ‘Ache’. Held up by a stellar production job from Loathe’s Erik Bickerstaffe, it’s a force of nature which will undoubtedly put the band on the map.

‘Ache’ by MTXS is released on 7th June.