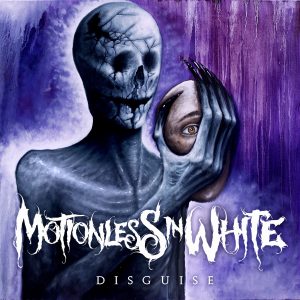 Motionless In White are wonderfully divisive. Their blend of industrial metalcore stirs up all kinds of emotion from those who see it as style over substance. Yes, their music is stylised, but there’s a lot to enjoy on new album ‘Disguise’, especially if you’re already on board with their goth-tinted brand.

At its best, the band hits you with short hook-filled blasts of accessible metalcore. While they’ve stayed true to the sound of their previous records, each song here offers something different. The production helps, by giving it bite and the industrial flavour is nicely integrated so the stops and fizzes feel earned, rather than grafted on.

By playing on big hooks, Chris Cerulli keeps you entertained, trying different things on every track. He’s drawn comparisons to Marilyn Manson before and it’s perfectly justified. Yet, he tries various other styles to keep you guessing. For example, he sings to real effect on the honest and heartfelt ‘Holding on to Smoke’.  His powerful screams also make a welcome return, particularly on the early tracks.

While the album is not a huge creative push, there are some great ideas. It can be daring and fun. On the anthemic for the unwanted, ‘c0de’, they throw in a monstrous outro just for the hell of it. The rock-y ‘Brand New Numb’ shares this glee and ‘Broadcasting From Beyond the Grave’ proves they don’t take themselves too seriously.

However, some songs are shamelessly derivative and it’s blatant where the inspiration has come from. For example, ‘Headache’ sounds like a Korn cover with its choice of guitar, bass and vocal tics. Despite this, it’s a strong track. Sadly, not every song is so focused and the results fall a little flat. ‘Undead Ahead 2: The Tale of the Midnight Ride’ can’t match its grandiose ambition and ends up being overlong, bland and too serious. A contrast to the album’s high points.

At its best, ‘Disguise’ delivers a fun bucketload of goth-flavoured metalcore mayhem. However, it sags in places, especially when they step outside their comfort zone.

‘Disguise’  by Motionless In White is released on 7th June on Roadrunner Records.