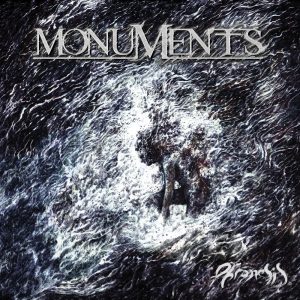 It’s easy to feel sorry for Monuments. In the four years since their last album, they’ve managed to burn through two drummers, and though they’ve continued to plough ahead, they’re ultimately in the same place they started, as a decent tech-metal band drowning in a sea of acts of similar or higher quality.

With an album like ’Phronesis’, it becomes difficult to view it as much more than the product of a decent band, but lacking the necessities to take it beyond that stage. This isn’t a problem exclusive to Monuments either, but that only serves to make this album all the more faceless. The likes of ’Hollow King’ and ’Celeste’ really face the brunt of this more than most, comprised of yet more layers of collapsing, iron-tipped riffs that sound fine on their own, but in the context of the scene as a whole, they could come from an innumerable amount of other bands and it wouldn’t make a difference.

But even so, this proves to be a sound that Monuments know their way around, and that alone prevents this from being all that bad. This is still a solid album, after all, made that way through some impressively fluid cleans from Chris Barretto that really come into their own on tracks like ’Mirror Image’ and especially ’Stygian Blue’. There’s a use of melody at various points here that captures such a deftness in this formula, and it’s a good look that Monuments could definitely pull off more often.

That does make being charitable towards this album seem more deserved, especially when, considered to some others in their scene, Monuments do actually feel like they’re trying to break out of the doldrums into something new. ’Phronesis’ isn’t that successful attempt just yet and is held back because of it, but the signs that are here, are at least encouraging.

‘Phronesis’ by Monuments is out now on Century Media Records.