Review: Modern Rituals – The Light That Leaks In 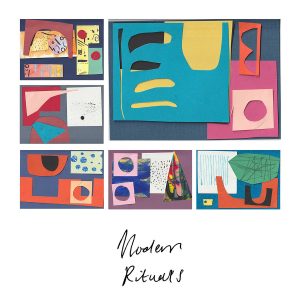 A year after their two-song split with Brunch, Bristol/London four-piece Modern Rituals are back with their debut full-length. Having supported the likes of Hot Snakes and Nothing, Holy Roar may seem like an unexpected home for the band.

‘The Light That Leaks In’ is a record which builds thematically on how uncomfortable and horrifically mundane life can get, complete with beautifully ambiguous lyrics like “Lost the page you tried to finger to, toss the book aside, Get your wing-tipped shoes on/ and slide in circles/for evermore” on ‘Entail’. Frontman Harry Fanshawe’s baritone vocal delivery is almost effortless, yet works perfectly within the context of conveying how miserable we can be as adults.

Sonically however the quartet have the misery-laden ferocity of Superheaven, entwined with the unpredictable melodies and hooks of Pile. Whilst certain moments meander and keep you on your toes, the downtrodden pop hooks ‘A Guide For The Sick’ and ‘Fog Machine’ are equally as likely to get stuck in listener’s heads. The song structure of tension creating build-ups into head throbbing crescendos works well for the most part, although occasionally certain cuts in towards the midpoint of the album somewhat blend into one another.

There are times where the release creates the feel of a nihilistic drug-addled nightmare, such as the drony discord riffs on the intro to ‘Nebulon’, while elsewhere, proceedings are grounded firmly back in reality.

Modern Rituals may not have created a particularly groundbreaking first LP, but with that being said, ‘The Light That Leaks In’ is the ideal soundtrack for coming to terms with the fact that maybe this world is a terrible, disgusting, cold place after all.

‘The Light That Leaks’ by Modern Rituals is out now on Holy Roar Records.