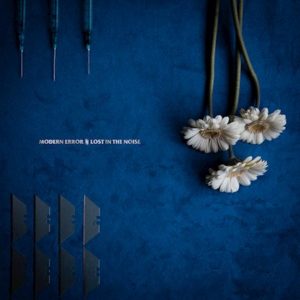 It’s been said countless times about countless bands, but if it wasn’t for the tolerance for experimentation and diversity within the UK’s current rock scene, an act like Modern Error would essentially be dead in the water. With boundaries being far less regimented than they once were though, the rise in real, raw music can’t be understated, and the scene has been all the healthier for it.

Of course, that relies on these bands actually being good, a factor that’s hardly a problem on ’Lost In The Noise’ considering that Modern Error’s visceral, cinematic post-hardcore is the sort that’s easy to get lost in and tough to escape from. It helps that there’s a palpable darkness and edge here as well, with the crushing angularity of ’Buried And Blue’ and ’Blackout Poetry’ complementing Zak Pinchin’s breathless screams excellently, and a blackened production job highlighting how oppressive and forceful everything else is.

It certainly helps that the thematic resonance is as strong as it is; falling down a dark, toxic spiral that reaches a particularly potent climax with the two reworkings of ’Funeral Verse’ and ’Separation Scars’ to close out. The former’s meshing of melancholic synth and abrasive passages does work well, but it’s the latter that really shines. Contorting itself into snarling, seething industrial noise that’s evident of a band that still have plenty to offer and plenty of ways to branch out.

That’s perhaps where ’Lost In The Noise’ succeeds the most; it might only be short, but it’s a tantalising snapshot of a band with mountains of potential that they’re already doing a great job of living up to. Indeed, Modern Error really do leave their mark here, so much so that they could easily be one of the most exciting new post-hardcore bands around.

‘Lost In The Noise’ EP by Modern Error is released on 1st March.