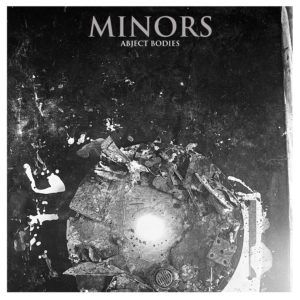 One of our ‘25 Bands To Watch In 2019’, Canadian Metallic Hardcore act Minors return to wreak havoc with their debut album ‘Abject Bodies’. Another hotly tipped Holy Roar release, if their ‘Atrophy’ EP is anything to go by, Minors will deliver something truly special.

Title track ‘Abject Bodies’ gets proceedings underway – an instrumental track paving the way with an array of chaotic hardcore, grating like a screaming toddler until slower tempos ultimately deliver something much heavier. It neatly segues into ‘Consumed’, beginning with erratic drums and abrasive guitars, swiftly delivering a sucker punch to the teeth. There is still time for the band to drag you through the mud as the track transitions into a slow breakdown.

‘Meanderist’ is reminiscent of the work of fellow countrymen Baptists, featuring burning riffs and heavy-handed drums, soaked in sludge and rage-fueled vocals. The band almost brings things to a grinding halt with a flurry of guitar feedback and harsh noise that leaves you wanting more. ‘Flesh Prison’ follows, making use of sauntering tempos, ripping into a display of snarling vocals, frantic drums and buzzsaw guitars. A combination almost but not quite too painful to listen to; it proves too difficult to pull away from the mesmerising bleakness.

The ballistic assault continues on ‘Boneyard’, a sensational effort; Minors’ brand of uncompromising hardcore demolishes the senses. ‘Erode’,  a droning piece of fuzz-laden beauty, rumbles from the depths of the abyss. Vocalist Jesse at his most brutal delivers savage animalistic howls which make your hairs stand on end. The album culminates in ‘Garden of Dismalism’, a seven-minute epic. Beat down madness, accompanied by guttural blasts of “eat my flesh” follow the five-minute buildup.

Minors really have unleashed the beast on this record. This is a hardcore album done right; a masterclass in all that is heavy from a band who will undoubtedly continue to warp minds. With their feet firmly in the door, there is nothing standing in their way on their sonic warpath.

‘Abject Bodies’ by Minors is released on 22nd February on Holy Roar Records.