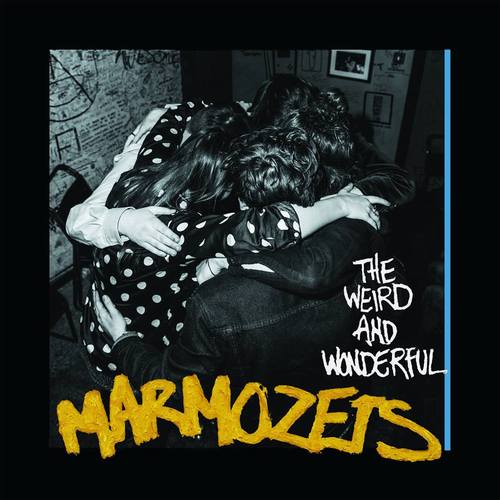 It would be very easy to open up this review by talking about how the average age of Marmozets is lower than all other bands at their level. It would be easy to explain that the band waited on record deals until finally signing with Roadrunner. However, none of that particular factors into writing a brilliant debut record. They’re just used as evidence to justify all astonishment when people first wrap their ears around ‘The Weird And Wonderful Marmozets’.

I remember reviewing ‘Passive Aggressive’ back when this site was just starting out; riffs, melodies and plenty of potential. I’ve always like technical stuff, so I did like Marmozets. But now, with the band’s debut LP, I love them. I think the right way I can describe them is ‘Pop-Mosh’. Hold on a minute there sunshine and hear me out.

The key part to Marmozets’ wide, crossover appeal so far is their formula of taking their previous angular and technical ability in writing ridiculous riffs and crafting them into some of the more memorable riffs of the year. This, combined with vocal hooks and melodies that are more contagious than freshers’ flu, is why I think “Pop-Mosh” is now a certified genre. There are pop sensibilities for the mainstream fans who’ve heard the flurry of singles released up until today (such as ‘Why Do You Hate Me?’ and ‘Move, Shake, Hide’) via the likes of big-time radio but don’t call Marmozets a pop band.

Hidden behind these perfectly (yes, perfectly) crafted songs that are already lodged into your brain after that first initial and quick judging listen are technically proficient musicians who could probably write into any genre they’d like. Why do that though when you can craft your own? Pop-Mosh you see. Let’s just use it for everyone’s sake. But still, the heavier elements are there. The intro of ‘Particle’ is a prime example before the verse introduces Becca with a gritty rasp sneaking into her voice. And then there’s the chorus. It’s absolutely massive. It’s bigger than any hyperbole that the Daily Mail has used and has Becca showing that she’s capable of whatever her intent is at any given point.

And whilst I’m currently explaining how ‘Particle’ demonstrates the band’s heavier roots doused in pop formatting, it could be said the same across the entire album. ‘It It Horrible’, ‘Cover Up’ and ‘Weird And Wonderful’ could’ve all been used as part of the lead singles leading up to this debut LP release with the piano led ‘Cry’ shaking things up a bit as the slight curveball that ‘Captivate You’ was; an example that it’s not all glorious tech and that there really is more to come. Then again, ‘Vibetech’ provides the glorious tech that older fans will crave, and it certainly satisfies that itch.

Actually, any song on ‘The Weird And Wonderful Marmozets’ could be used as single material, and that’s probably the biggest problem here. How on earth do Marmozets include all these fantastic songs into their live set? In creating a stonking debut LP they’re also possibly disappointing at every live show by not playing someone’s favourite song. But, and a big but here is that it’s simply because everyone can leave this listening experience with a different favourite. There’s not necessarily one stand-out track because they’re all so darn good.

Obviously, I like ‘The Weird And Wonderful Marmozets’. I think that’s clear with the number of superlatives I’ve laid down in this here review. Actually, I love this album, don’t I? I think that’s clear now. And in further thinking, there’s nothing wrong here. I have no idea how the band will top it. But the thing is, they will. As the band carry on with their worldwide domination and the normal teenage life becomes obsolete, Marmozets will be influenced by all the new people they meet and of course, their musicianship will grow stronger and stronger. So, whilst this is pretty darn good, it’s probably not their best yet.

‘The Weird And Wonderful Marmozets’ is everything I’d hoped the album would be, and it’s possibly even better than that. It delivers on many levels and to such a wide spectrum. And then, right, I remember that the average age of Marmozets is lower than all other bands at their level. And that they waited on record deals until finally signing with Roadrunner.  However, none of that specifically factors into writing a brilliant debut record. They’re just used as evidence to justify all astonishment when people first wrap their ears around&nbsp‘The Weird And Wonderful Marmozets’. Are you still astonished?

‘The Weird And Wonderful Marmozets’ by Marmozets is out now on Roadrunner Records.