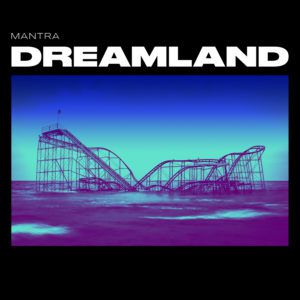 West London trio Mantra are the kind of band whose sound rests in that sweet spot between post-hardcore and straightforward hard rock. The kind of middle ground that lives in a world where At The Drive-In can tour with Royal Blood and no one bats an eyelid. Having cut their teeth supporting the likes of Fizzy Blood and LTNT on previous EPs ‘I Want’ and ‘Sleep’, Mantra provide a confident and brash opening gambit with debut album ‘Dreamland’.

Make no mistake, these songs are all competently written alt-rock bangers, and opening with the sturdy bounce of a re-recorded ‘I Want’ demonstrates their self-assurance in their craft. Chucking any traces of subtlety or nuance in favour of chunky riffs helps set the tone for ‘Dreamland’ and establishes a level of energy which stays consistent across these twelve tracks. This energy is often the driving force of tracks such as ‘Stroke’, ‘Run Away’ and ‘Annette’ particularly when paired with frontman Simon Stark’s sweeping vocals, which are reminiscent of a young Thom Yorke.

As a unit, the three-piece are flawless, proven in Stark’s slathering guitar grooves weaving themselves around Richard Leed’s slow and swaggering bassline on the QOTSA-esque ‘Too Little Too Late’ while the riff-worshipping ‘Skinned Alive’ is a hefty dose of garage indie rock where all members are evidently pushing themselves to play as hard as possible.

While ‘Dreamland’ is packed with songs which will flourish in a live setting or instant hits to listen to in the gym, one is left feeling that Mantra haven’t realised their full potential yet. It’s fun enough to create punchy rock songs, but one could easily picture the trio expanding into seven-minute tracks with more synthesiser and string sections, without any compromise to their current style. But for a band two-and-a-half-years in their infancy, this is an impressive offering. Let’s hope we see many more offerings in years to come.

‘Dreamland’ by Mantra is out 15th February on Dine Alone Records.