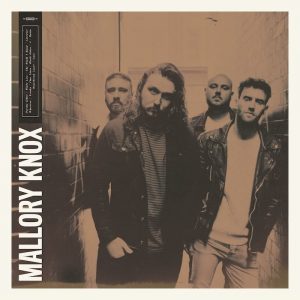 It’s make or break time for Mallory Knox. Following 2017’s lacklustre ‘Wired’, frontman Mikey Chapman departed. Now, bassist Sam Douglas has stepped into his shoes. A very different vocalist, it was a brave choice. It signals a significant shift in the band’s sound, with everything riding on the quality of their self-titled record.

Wasting no time, the band establish their new approach. It’s riff-heavy, stripped back and very much garage rock. Songs like ‘Psycho Killer’ and ‘Whenever’ are driven by huge slabs of muscular guitar. There are no slow songs, no plodders. Even the poppier numbers such as ‘4’ and ‘Black Holes’ are ballsy and don’t let up. The comfortable arena-filling sound of their older work is gone. This is a harsher and dirtier album, clearly, they’re not fawning to their old fans.

Douglas has a good voice. It’s not as smooth or powerful as Chapman’s and at times he can sound extremely rough. It’s a huge, but very effective, contrast.  Especially as he can turn out a superb hook. On ‘Freaks,’ his voices twists and turns to real effect. While ‘White Lies’ does use similar melodies to their older songs, he really makes them his own.

Importantly, the songwriting is strong throughout. ‘Wired’ tried to hide behind cloying production, there’s none of that here.  Everything is energetic and assured. Joe Savins and James Gillett both fire out excellent effects-laded guitar lines. On ‘Fine Lines,’ these add an extra push, whereas on ‘Heartbreak Lover’ they bring a subtle flavour. The thumping riff on ‘The World I Know’ would never have worked with their old sound, but it fits perfectly here. Expansive songs like ‘She Took Him To The Lake‘ are absent, but if that’s the price of consistency, it was well worth the trade.

Mallory Knox have taken a risk, but the music speaks for itself. It’s straightforward, confident and consistent. They might not be the band you knew, but they’re now far easier to love.

‘Mallory Knox’ by Mallory Knox is released on 16th August on A Wolf At Your Door Records.