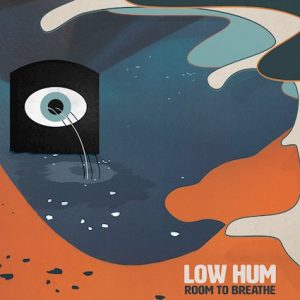 Born and raised secludedly in Hawaii surrounded by surfing and native music, Collin Desha picked up a ukelele at the age of 12 which kickstarted his creative passion. Years later, he moved to Los Angeles, keen to expand on his musical experiences. Having absorbed the vibrancy of the L.A. scene, Desha – now a multi-instrumentalist – created a home studio and created an act under the name of Low Hum. Since releasing an eponymous EP last year, he is now bringing out his debut full-length ‘Room To Breathe’, which is packed full of hazy, surf-pop goodness.

‘Comatose’ introduces us to the record at a slow and sweet pace, blended with fuzzy overtones providing a serene, spaced-out start to the journey. ‘Sink Your Teeth’ and ‘Sunchaser’ are punchier, with confident grooves complementing Desha’s silky smooth vocals which are reminiscent of Tame Impala, exuding vibes suited to warm summer nights.

As a debut, ‘Room To Breathe’ does a great job of showcasing Desha’s variety both thematically and musically. ‘Crimson Cardinal’ and ‘Nebraska’ are vulnerable, tackling personal and emotional depth surrounding the struggles of depression and loss after the death of loved ones, posing poignant lines such as ‘Time tries to make you fade away’. Further on, the gritty, psychedelic ‘Strange Love’ (inspired by Stanley Kubrick’s ‘Dr Strangelove’) displays Low Hum‘s ability to ramp things up with its crunchy chugging chords and darker vocal tones.

While ‘Room To Breathe’ serves as a good introduction to an intriguing and promising new artist, the continual fuzz of the record sadly means that it is hard to distinguish the tracks from each other and identify any that really stand out. This also leads to a lack of sense of direction, with songs seemingly blurring into one and little to drive the record forward. Despite this, it is still refreshing and an enjoyable listen nonetheless and we will certainly be hearing more of what Low Hum has to offer in the future.

‘Room To Breathe’ by Low Hum is released on 7th June on Last Gang Records.