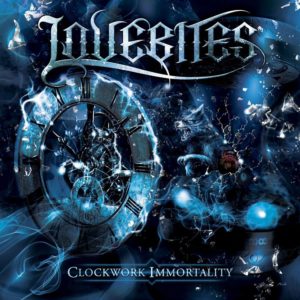 As much as the cheesiness and OTT flash of power-metal can be seen as a hindrance, Lovebites have been using to their advantage with impressive gusto. 2017’s ’Awakening From Abyss’ put paid to lazy Babymetal comparisons with dazzling technicality that established the only similarities as being an all-female Japanese metal band. It highlighted a level of proficiency and prolificness that has only strengthened their profile even more.

Furthermore, it’s been made consistently clear how much of a precedent this instrumental dexterity and real song craftmanship has over being braggadocious, which is so common in power-metal. ’Clockwork Immortality’ is no different either, standing as another album which delivers enormously in terms of sweeping fretboard galloping, but lacks a stronger core at times. Admittedly, Lovebites are better now at retaining that element than they have been – ’Mastermind 01’ is as good a piece of evidence as any – but the nonstop deluge of solos can sometimes feel like overkill when easing back would be a perfectly viable option.

That’s not to say that there isn’t talent here. Quite the opposite, in fact, as barely a moment goes by where Lovebites don’t show an enormous musical pedigree with the greatest of ease. Obviously, it’s the guitar work that takes the gold, holding the bracing, battle-ready gallop of so many of their progenitors that brings the classic metal influence front and centre on the likes of ’Empty Daydream’ and ’Journey To The Other Side’. Then there are Asami’s vocals, and while she can lack a greater range, she’s still a great fit for metal as soaring as this.

In other words, ’Clockwork Immortality’ is a power-metal album at its most concentrated form that should appeal to anyone with an appreciation of the genre. That’s hardly an enormous deviation from Lovebites’s past work, and how long they can carry on with a similar level of success remains to be seen. Nevertheless, their output is definitely solid and is worth appreciating.

‘Clockwork Immortality’ by Lovebites is released on 18th January on JPU Records.