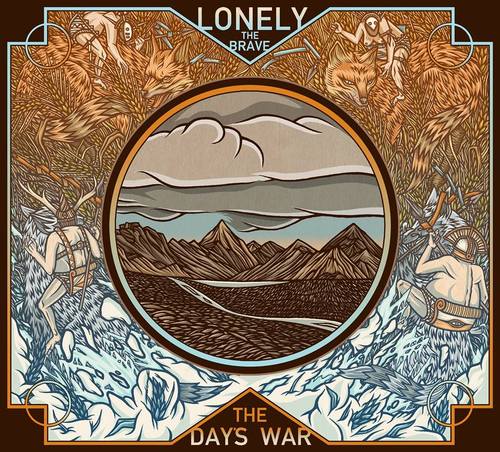 “Sometimes good things come to those who wait.” A statement that Lonely The Brave have probably been saying to themselves for the best part of eighteen months. With an array of tours and festival appearances under their belt, the long wait for their debut effort is now over. And it has certainly been worth the wait.

Admittedly it’s easy to get caught up in the “hype” the Cambridge band have had over the last year and half, but ‘The Day’s War’ shows LTB deserve all the talk and praise they’ve received. Not only is it one of the strongest debuts of the year, it’s one of the albums of the year.

From the outset, the quintet deliver a double offering of arena-ready rock. For those who have been following LTB for quite some time will have had ‘Trick of the Light’ and ‘Backroads’ on repeat for months with the latter setting the tone for the band’s cinematic approach, something which is partly accomplished by David Jakes’ soaring vocals, but more on that later.

Whilst some may consider them to be one-dimensional, the band quickly show they are anything but. First off ‘Islands’ is a thriving, fast-paced number that shows LTB can truly “rock.” Whilst ‘Dinosaurs’ slows things down with atmospheric guitars that swell alongside delicate “ooh’s” before building to a gradual payoff that allows Jakes to take center stage.

A part of me feels bad for giving Jakes’ vocals so much attention but I’m sure I’m not the only writer who has done so. However the sheer power of his lungs helplessly takeover throughout ‘The Day’s War.’ Even on tracks like ‘Victory Line’ which contain stringent guitar work from Mark Trotter and Joel Mason. Without a doubt Jakes’ powerful voice has a sense of magnetism that simply draws you in from start to finish. Just listen to ‘The Blue, The Green’ and be amazed by the soaring notes he holds at around the 2:20 point.

However this isn’t just “The Dave Jakes Show”. As a complete band, Lonely The Brave are an accomplished unit. Alongside Jakes’ extraordinary vocals, Gavin Edgeley’s drums provide a strong, pounding edge to the band’s vibrant sound. Whereas bassist Andrew Bushen rounds off the tight package.

The album’s title track later on shows the band’s ability to become a stripped down, intimate force but ultimately it’s the band’s larger-than-life alt rock style that wins out. Sure that might frustrate some as it’s clear they have the capability of becoming more versatile, yet you can’t fault the quality of songs this record provides.

I can’t think of any words that have been used elsewhere to describe this rock juggernaut of a record. Lonely The Brave are simply a contemporary rock band that have a set of songs that are ready to be heard by crowds far bigger than they’ve been playing to. They don’t have to relay on any gimmicks or elaborate backstory to get attention. They’re not another critically over-hyped band. Lonely The Brave are genuine and ‘The Day’s War’ is a testament to that ethos. A thoroughly accomplished record that I’m sure will be the first of many.

‘The Day’s War’ by Lonely The Brave is out now on Hassle Records/Columbia Records.