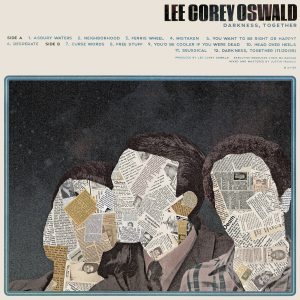 Putting their unique folk-punk spin onto Weezer-esque power-pop, Lee Corey Oswald release their follow up to 2014’s ‘Regards’. On ‘Darkness, Together’, the Pennsylvania natives continue their evolution, offering up a solid effort that in a just world would see them achieve greater recognition than they have thus far.

It kicks off with the high-octane ‘Asbury Waters’, a distortion-heavy track which is an ideal way for the band to re-announce themselves. It’s followed by the more melodic but still hard-hitting ‘Neighborhood’ and ‘Ferris Wheel’, with barely any time to catch a breather. Following the relentless energy of the first three tracks comes ‘Mistaken’. One of the stand-out moments on the album, frontman Lee Ellis displays his vulnerable side as he sings “I’d love to be your man/But will you take a boy instead?” after which point the song kicks in for two minutes of impeccable pop-punk.

The mid-section of the record is the strongest, with ‘Right Or Happy’ packing a ferocious post-hardcore punch and the more stripped-down ‘Desperate’ showcasing Ellis’ vocal prowess. The grungy ‘Curse Words’ begins with a compelling bass riff before the drums commence, while ‘Free Stuff’ is surely destined to be a staple at live shows, with Ellis demanding “Get your hands up if you want free stuff”.

‘Head Over Heels’ would not be out of place in the pop-punk scene of the 2000s; it’s easy to imagine hordes of angsty teenagers scrawling “Trust is a double-edged sword” on their Converse in black Sharpie. In contrast, the folk-punk of album closer ‘Darkness, Together’ offers respite after the previous frenetic 25 minutes. It is a fitting way to culminate the record.

A wholly impressive showing – on the basis of ‘Darkness, Together’ and its effective amalgamation of multiple sub-genres, it seems evident that the only way is up for Lee Corey Oswald.

‘Darkness, Together’ by Lee Corey Oswald is released on 12th October on A-F Records.